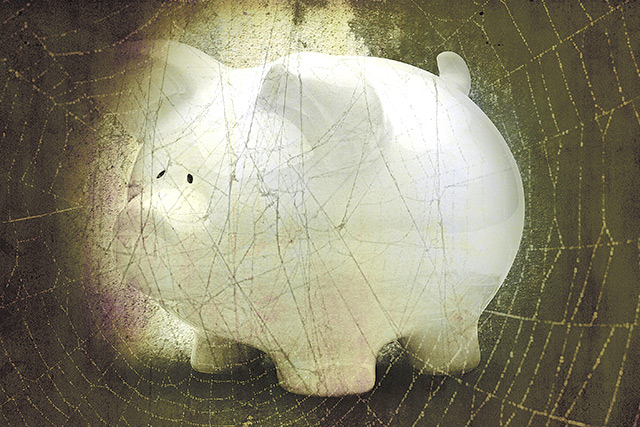 05 February, 2015
Print this article Font size -16+
Over Rs 14,000 crore! That’s the amount of unclaimed investments waiting to be claimed by rightful owners. Insurance firms, banks, listed companies and asset managers are grappling with the unusual problem of investors not coming back for their money at the end of term. In most cases, it is carelessness that holds up investors from discovering their stash of funds.
Unclaimed investments are usually found in abandoned bank accounts, unclaimed insurance policies, unredeemed mutual fund units, unbanked dividend/tax refund cheques and inactive stock trading accounts.
“People often forget about their investments. Take the case of bank accounts, people hold so many that they lose track of it,” says Harsh Roongta, founder, Apnapaisa.com, an online marketplace for financial products.
“Earlier, people opened new bank accounts every time they changed jobs; they retained small amounts of money in all these accounts. These accumulate to larger sums of money over a period of time. People rarely revisit their old bank accounts; they don’t even close their accounts. In such a scenario, they would never know the existence of such funds,” Roongta explains.
Death of primary investor is the other reason why investments go unclaimed. In the event of sudden death of the investor, sometimes no one comes forward to stake a claim to the investment as the family of the deceased has no knowledge of it.
As per data collated from various sources, about Rs 14,200 crore worth of unclaimed funds is lying idle in bank accounts, lapsed insurance policies, timed-out mutual fund units and listed companies. The number could quintuple or sextuple if you consider idle funds in inoperative public provident fund accounts, postal accounts and small savings scheme pools.

Insurance leads the tally among (savings) instruments that declare unclaimed proceeds as part of their mandatory filings. Close to Rs 6,750 crore is lying unclaimed with insurance companies alone. General insurance companies, which offer personal health and motor accident cover, have close to Rs 900 crore worth of unclaimed proceeds. The case is no different with banks, stocks and mutual funds that have unclaimed funds worth Rs 3,652 crore, Rs 2,044 crore (across 650 listed companies) and Rs 250 crore (in 26 asset management companies), respectively.
The Government Push
The problem of unclaimed investments gained public attention when Finance Minister Arun Jaitley made a mention of it in the Union Budget. “A large amount of money is estimated to be lying as unclaimed amounts. These are mostly out of investments belonging to senior citizens; on their demise, remain unclaimed for want of relevant payment instructions,” the FM said in his Budget speech.
Subsequent to this, a committee was set up under Reserve Bank of India deputy governor H.R. Khan to find out the quantum of unclaimed deposits with the postal department and public sector banks. The FM may take inputs from the committee before making budgetary decisions this year. Policy experts feel the government may attach funds (of unknown beneficiaries) that have been lying unclaimed for a long time — say 10 years and above.
The banking regulator has already made a move in that direction. Last year, RBI directed banks to remit deposits, classified as unclaimed, to the Depositor Education and Awareness Fund. An unclaimed deposit, as per RBI’s definition, is one wherein an account is not operated for 10 years or refers to any deposit or any amount remaining unclaimed for more than 10 years. Recently, insurance regulator IRDA has directed all insurance companies to disclose unclaimed amounts in their financial statements. A circular issued by IRDA in 2014 attributes the rise in unclaimed amounts to delay in settlement of claims and change in address of the insured.
The Deposits Kitty
Banks are required to conduct an annual review of accounts that have been inoperative for more than a year. The term ‘account operation’ means a simple credit or debit in the account, other than crediting of periodic bank interest or debiting of service charges. If the account remains unused for more than two years, the bank would classify it as a ‘dormant account.’ However, at no point are banks allowed to truncate payment of interest to inoperative or dormant accounts.

More than the accounting hassles, banks are concerned about frauds while dealing with chunky inoperative accounts. Hence, the annual classification. It helps to keep an eye out for any unusual activity (or transaction) in such accounts.
As per RBI data, public sector units (PSU) banks account for over 88 per cent of all unclaimed deposits. PSU banks hold Rs 3,236 crore of the net Rs 3,652 crore categorised as unclaimed deposits. State Bank of India and its affiliates alone vault unclaimed public deposits worth Rs 714 crore. Bank of Baroda, Canara Bank, Punjab National Bank and Union Bank of India book unclaimed deposits worth Rs 207 crore, Rs 525 crore, Rs 385 crore and Rs 390 crore, respectively. Among private sector banks, ICICI Bank leads the tally with Rs 101 crore. ING Vysya Bank and Federal Bank have unclaimed deposits worth Rs 52 crore and Rs 49 crore, respectively.
“Banks are very proactive while dealing with inoperative accounts. To reclaim your account, you only have to prove that you are a genuine account-holder,” says Roongta.
“In case of accounts where the principal holder is dead, the nominee (as named in the account) can stake a claim. If there’s no nominee, the legal heir can approach the bank for restoration of the account. If the account has large sums of money, the bank may ask for a court-issued letter of succession,” he explains.
People would be better off with a manageable number of bank accounts. Also, it is prudent to close bank accounts that have not been in use for more than a year. Account-holders should update their banks about change of address and other co-ordinates. Assigning nominees to bank accounts is also very important.
Claims Unclaimed
Unclaimed policy amounts have been consistently growing among insurance companies over the past few years. Among life insurers, LIC has the highest figure for unclaimed amount of policy holders at Rs 1,548 crore followed by Reliance Life (Rs 1,502 crore) and Bajaj Allianz Life (Rs 544 crore) at the end of 31 March 2014 (see Rising Pile).
Unclaimed insurance policies have to be viewed contextually. In the case of private insurance companies, a large chunk of unclaimed policies comes from unit linked insurance plans (ULIPs). Therefore, if a company has not sold significant number of ULIPs, its unclaimed figures could be smaller.
Contacting policy-holders remains the biggest challenge for most insurance companies.
“When customers or policyholders don’t intimate address change to the insurer, claim intimation do not reach them on time. Their pay-out cheques also do not reach them. In majority of lapsed paid-up policies, customers are not aware of the maturity date as they don’t pay regular premiums,” says Minati Dash, head of policy servicing at Bajaj Allianz Life Insurance.
The case gets more complicated when the policy-holder dies a sudden death. “If the family of the deceased life assured, unaware of the policy, decides to relocate, even our mails will also not reach them,” Minati explains.
The trend of rising unclaimed policy amounts over the past few years could be attributed to the growing vintage of insurers and large volume of ULIPs sold between 2006 and 2010. Life insurers expect the situation to improve soon with most insurance pay-outs getting e-bank linked.
“Since October 2014, it is mandatory to give bank account details as part of the application for new policies. So this problem of unclaimed proceeds will be ironed out for policies sold after this date. Additionally, we advocate the electronic payout mode for convenience and safety purposes. For the first nine months of financial year 2015, 99 per cent of our payouts, in case of death claims, were made via the electronic mode,” says Sandeep Batra, executive director, ICICI Prudential Life Insurance.

Surprisingly, the problem of unclaimed policies is not restricted to life insurance covers alone. Even general insurers have their share of unclaimed policies — albeit at a much lower level. As on 31 March 2014, general insurers had unclaimed policies worth Rs 900 crore (see Rising Pile).
United Insurance had the maximum unclaimed amount at Rs 147 crore followed by ICICI Lombard (Rs 102 crore) and Bajaj Allianz General Insurance (Rs 92 crore).
“We have in our books an amount of Rs 6.1 crore as on end-December 2014, which is due to policy holders,” says K.G. Krishnamoorthy Rao, managing director and CEO of Future Generali India Insurance.
“Out of the Rs 6-odd crore, Rs 4.7 crore falls under claims cheques that have not been encashed and become stale. Many times refund amounts are less than Rs 100 where clients do not show much interest,” Rao clarifies.
Lost Fund Units & Stocks
A survey by Value Research reveals that 26 mutual fund houses have unclaimed redemption and dividend proceeds worth Rs 224 crore. The actual figure could be a lot bigger as quite a few large-sized funds have not been captured in the data collected (see Forgotten Funds).

That said, mutual fund executives are not worried as most of their dealings (these days) happen through electronic banking channels.
“Very rarely do we issue cheques to investors these days. Most payouts are wired to the bank accounts of customer,” says Rajiv Shastri, managing director and CEO of Peerless Mutual Fund.
It is relatively easy to reclaim mutual fund investments in the event of loss of fund documents or death of the original investor. With proper identification, fund proceeds can be redeemed.
“A close family member needs to just contact the distributor or fund registrars to process the claim. They can also know about the deceased person’s other fund investments by presenting PAN number to the distributor or fund registrar,” Shastri adds.
Apart from funds, even listed companies have a huge pile-up of unclaimed dividends. As on 31 March 2014, a sum of Rs 2,044 crore was lying idle in the books of 680-odd listed companies (see Dormant Dividends).
“This is happening only because of the sheer carelessness of investors,” says Prasanth Prabhakaran, president, India Infoline, a stock broking firm.
“Investors never update their personal details (change in address, bank account details) with depository participants. This makes them unreachable for all practical purposes,” he adds.
Bottom Line
Uncovering a stash of unclaimed money can be a satisfying experience for even rich investors. All you need to do is to check back and update on your old bank accounts, insurance/ investment policies and dormant demat accounts. For all you know, a mini treasure chest is waiting to be found.
(This story was published in BW | Businessworld Issue Dated 09-02-2015)
Tags assigned to this article:
magazine rbi finance investment icici irda bajaj allianz shailesh menon magazine 09 february 2015 minati dash