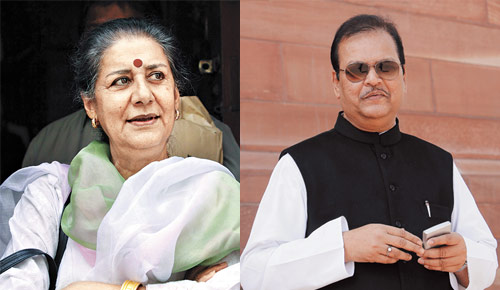 08 November, 2014
Print this article Font size -16+
Ahead of 27 October reshuffle of the Union Council of ministers, three Cabinet ministers and a minister of state resigned on 26 October, saying they want to work for the party.
Information and broadcasting minister Ambika Soni, social justice and empowerment minister Mukul Wasnik and tourism minister Subodh Kant Sahai and MoS justice and empowerment Mahadev Khandela met Prime Minister Manmohan Singh and submitted their resignations. External affairs minister S M Krishna quit the government on 26 October.
The ceremony for swearing-in of new ministers is scheduled at 11.30 hours at the Rashtrapati Bhavan on 28 October when a number of new faces are likely to be inducted. Prominent among them are actor-turned politician Chiranjeevi from Andhra Pradesh and A H Khan Chowdhry, MP from West Bengal, who is also the brother of the late Ghani Khan Chowdhry.
The Cabinet reshuffle could be the last before the Lok Sabha elections slated for 2014. Whether Rahul Gandhi would join the government is still a matter of conjecture even as the Prime Minister held consultations with Congress President Sonia Gandhi on 26 October, apparently to give final touches to the exercise.
Younger ministers like Sachin Pilot, Milind Deora and Jyotiraditya Scindia are likely to be upgraded.
There have been berths vacated by DMK representatives A Raja and Dayanidhi Maran in the last two years after their names cropped in the 2G scam. However, DMK President M Karunanidhi had recently made clear that his party will not like to reclaim their lost berths.
There is speculation that some young faces, considered close to Rahul, like Manicka Tagore and Meenakshi Natarajan could be inducted into the council of ministers.
S M Krishna, who resigned as external affairs minister, said it was "time up" for him to make way for younger blood and appeared to keep his options open on playing a role in Karnataka politics.
"...the flavour of the season is that youngsters must take over the reins of responsibility and I felt that it was time up for me to make way for younger blood to take over. I am glad that this initiative has been by and large appreciated," he told reporters after meeting Prime Minister Manmohan Singh, a day after he quit the government.
Asked whether it was the Prime Minister or he himself who decided to step down as Union Minister, Krishna said, "The decision came from within. And my wife had a major role to play in the decision making."
The possible names of the successors in the external affairs ministry include commerce minister Anand Sharma.
Sahai's name had cropped up in a controversy following media expose that he had recommended for allocation of coal block a company in Jharkhand in which his brother was a Director.
Work For The Party
Offering their resignation, Soni, Wasnik and Sahai said they will work for the party. Soni was Congress General Secretary for several years and was Political Secretary to Congress President Sonia Gandhi while Wasnik was handling the dual responsibility of Congress General Secretary as well as Union Minister.
Before meeting the Prime Minister, Sahai said that Congress president Sonia Gandhi called him to draft him for party work.
"It is an honour to work for the party. I am offering my resignation to Prime Minister. Party President (Sonia Gandhi) and others want me to work for the party so I will be working to strengthen the party as the party is supreme.We are in the government because of the party. Party is supreme and will always be supreme," he said.
Soni said, "I have taken Prime Minister's permission to resign. It is not appropriate if I do it on my own so I have taken his permission and explained it to him".
Asked if she was willing to work for the party, she said, "I think it is an honour".
Wasnik said, "I have been working for the organisation for the last several years and I would like to work for the organisation".
The reshuffle of the Union Cabinet, which could be the last before 2014 Lok Sabha elections, is expected to see induction of new faces in the government.
Chiranjeevi is being rewarded for his help in ensuring stability of the Congress government in Andhra Pradesh by lending the support of 18 of his MLAs after the merger of his party PRP.
The other changes could include ministers holding dual portfolios shedding one of their responsibilities.
(Agencies)
Tags assigned to this article:
anand sharma prime minister manmohan singh top 1 ambika soni congress president sonia gandhi external affairs ministry rashtrapati bhavan chiranjeevi subodhkant sahai mahadev khandela