Washington [US], February 26 (ANI): Audio streaming platform Spotify has announced that it is launching a new feature that will allow its user to filter one's Liked Songs by genre or mood.
According to Mashable, the new capability will provide its user with the freedom to listen only to titles that match his/her vibe at the moment without suddenly switching to a different kind of mood. 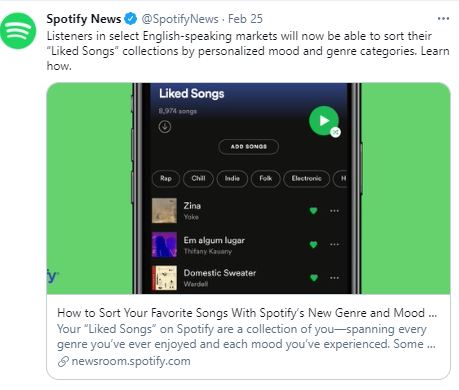 With the genre and mood filters, one can sort favourite songs by up to 15 different mood and genre categories. However, one's Liked Songs library needs to have at least 30 titles in it for the filters to show up.
As reported by Mashable, to enable the new filters, a user can simply open 'Your Library' and then go to your 'Liked Songs'. After that, pick a filter that is displayed across the top of the playlist header. So, all the titles under that mood or genre will show up. One can also change the selection by tapping the x button beside the filter and then choosing another mood or genre.
These filters will update as one removes or adds new songs to the library. Initially, these filters will be available in the U.S., Canada, U.K., Ireland, Australia, New Zealand, and South Africa in the next few weeks. The feature will go live on Android and iOS for free and paid subscribers. (ANI)