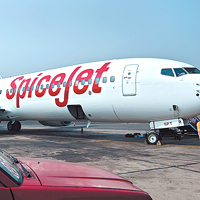 08 November, 2014
Print this article Font size -16+
Budget carrier SpiceJet said on Tuesday it is "premature" to comment on the possibility of selling shares to any interested investor, reiterating that some investors had shown interest after a recent rule change in the sector.

SpiceJet called media reports in the recent past on a possible equity infusion in the company as "speculative".
Tags assigned to this article:
news 5 spicejet stake sale qatar airways