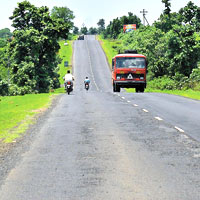 08 November, 2014
Print this article Font size -16+
Scrambling for remedies as investors' faith in India sagged, the government said last week it fast-tracked approval for a slew of infrastructure projects worth $28 billion: but the stroke of a pen in New Delhi will not be enough.

The government hopes that speeding up the launch of hundreds of new power plants, highways and oil exploration blocks will breathe new life into an economy that has fallen off its perch as an emerging market high-flier.

Growth in the latest quarter was the slowest since during the global financial crisis, and the rupee has tumbled ever deeper against the US dollar. Failing to get the projects off the ground would be another blow.

However, there is no evidence to suggest that these projects will somehow sidestep the obstacles that have hobbled construction for years - from red tape and land acquisition battles to banks' unwillingness to lend to a risk-prone sector.

Only a quarter of infrastructure projects are completed on time in the country, according to a 2012 report by Ernst & Young consultants.

Financing will be one of the biggest challenges right now. The infrastructure sector is one of the biggest contributors to banks' growing bad loans, with outstanding debt of about $120 billion, and tight liquidity conditions mean debt-laden companies will find it tough to raise fresh funds.

"These new measures are much too wonderful to be true," said Eric Mookherjee, a Paris-based fund manager at Shanti India, which manages Indian stocks worth more than $300 million, including IRB Infrastructure Developers.

"Expediting approvals for the projects that were stalled for years is not going to start the machines from tomorrow morning," he said. "The issue with infrastructure in India is financing, and if liquidity is going to be sucked out of the market to support the rupee it will be very hard for the banks to fund these projects."

Hoops And Hurdles
Anil Swarup, a senior official in the prime minister's office who heads a group that monitors and helps steer projects already cleared, said no companies had complained to his group of a lack of progress. However, he accepted that a fast-tracked project still faced many hurdles, including wrangles over land acquisition and law-and-order problems at a state level.

"We cannot expect an overnight transformation," he said. "In any project, there would be a number of issues and ... until those are resolved, the project does not go on stream."

One beneficiary of last week's project clearances by a cabinet panel was Essar Group, a diversified conglomerate with interests in power, oil and steel. After a 5-year wait, Essar was finally promised environmental approval to develop two coal blocks that will feed a power plant in the state of Jharkhand.

The reaction of one company official, though, was lukewarm. The approval may have come through, but a timeline for when the company can actually start mining was still uncertain.

"Funding is linked to the environment clearance to the coal blocks, and banks will release funds once we have all the clearances. The announcement is a positive development, but we have got nothing in our hands, so we will progress on this once everything has been approved," said the official.

Shivering Rupee
India's track record for infrastructure development is miserable compared with China and most emerging market economies, and its failure on this score has sapped growth.

The government has targeted spending of $1 trillion on new projects over the five years to 2017, but it has fallen short of previous funding and implementation goals, and much of the country is still plagued by power blackouts and bumpy roads.

A land acquisition bill, which is aimed at speeding up infrastructure and industrial projects by giving farmers better compensation for selling their land, was passed in the lower house of parliament on Thursday.

It takes about 295 days to acquire or lease public land in India, more than twice the global average, Standard Chartered wrote in a research note on Friday that cited World Bank data. Getting private land takes 99 days, versus a global average of 61 days.

Despite New Delhi's best efforts to get infrastructure moving, the problem appears to be getting worse. The percentage of total projects delayed on account of land acquisition-related issues more than trebled to 11.3 percent as of March 2013 from six years ago, the note said.

"How can you run through these projects when land must be acquired before financial closure?" said a senior official at the Planning Commission on clearances. "You can't talk things up. Look at the rupee, it's shivering."

The Federation of Indian Chambers of Commerce and Industry was scathing about the bill, which will replace colonial-era legislation, saying that not only will land cost more, the process of acquiring it will be stretched by 4-5 years.

Stopping The Rot
The government's Cabinet Committee on Investment (CCI), set up by Prime Minister Manmohan Singh in January, was charged with stopping the rot by solving inter-departmental disputes and speeding up clearances, especially environment and fuel permits.

Among its successes, the committee ended a 14-year saga involving NTPC, the country's largest power producer, and Coal India, the world's biggest coal miner, over the construction of a 1,980 MW power project.

NTPC was initially granted permission to build the plant in Jharkhand, but then Coal India claimed the site after coal reserves were discovered underneath it. After years of dispute and the establishment of a committee headed by a top civil servant to look into the case, the CCI ruled in favour of NTPC.

However, NTPC still had more hoops to jump through before it could finally issue equipment tenders. It had to move the construction site by about 300 metres, and because environmental clearances had expired they had to be obtained again.

Such hurdles are typical in India, where the average project needs 56 separate permissions that can take two years to obtain.

Vinayak Chatterjee, head of the Feedback Infra consultancy, said the clearances were a positive step, but resistance from ministries keen to guard their veto rights has watered down the CCI's powers.

"The CCI was originally conceived as a National Investment Board ... and that was supposed to be a far more powerful body which would have been empowered to give clearances," he said. "The CCI does not have statutory powers to override line ministries. So effectively it has become a pressure and coordinating body."

"I think the line ministries felt uncomfortable about their powers being taken away, as usual," he said, referring to those ministries in the line of approvals needed for such projects.

For example, the committee can take a decision to nudge Coal India to provide fuel for a power project, but it cannot force the miner to do so, or stipulate a timeline for the supplies, an official at a major infrastructure group said.

"While the CCI has cleared the projects, there is no clear uptick in activity related to such projects," Barclays said in a June research note. "We believe that activity/investment related to such projects could remain subdued, given the weak momentum and sentiment in the economy - that is, the CCI clearance, per se, is not the 'game changer' the government sees it as being."