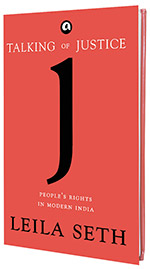 10 March, 2015
Print this article Font size -16+
Can a woman get impartial justice from a man?  Or, conversely, can a man get impartial justice from a woman,” asks Leila Seth, rhetorically, in the course of her book, Talking of Justice: People's Rights in Modern India. Seth, one of India’s leading legal luminaries and the first woman judge of the Delhi High Court, is  a go-to person for judicial enquiries in rights cases — most recently she was a member of the Justice Verma committee constituted in the aftermath of the rape of the young woman known as Nirbhaya. In Talking of Justice, Seth addresses topics from gender justice and the rights of children, prisoners, and gays to the larger issue of judicial reform.
She goes on to answer her question. “The answer is yes, in both cases,” she says. “But judges will have to learn the language of equality and impartiality.” And therein lies the root of the problem. In her essays, Seth brings out why justice is often denied, and who bears the brunt of absent justice. For example, accepting that the girl child is the victim of the economic burden her family is faced with, she explains the role education plays (educated people see the merit in sending their girl children to school, thus multiplying a trend), and how the dowry system and child marriage act as impediments.
The plight of prisoners is addressed in detail, giving examples of how they are denied basic justice and arguing for better reformative programmes. In the US, she points out, it was estimated that it cost as much to keep somebody in prison as it would to keep him in Harvard. She brings her experience from the courtrooms into a chapter on judicial administration, and ends with a critique of the latest Supreme Court ruling on gays criminalising homosexuality and rendering her son, the author Vikram Seth, an offender under Indian law.
Throughout the book she uses arguments that address the root cause of the problem, indicating how society should respond to these challenges. Many of these may sound like the same old chorus, but if they remain a problem, it is only because it they are rarely followed by concrete changes.
(This story was published in BW | Businessworld Issue Dated 23-03-2015)
Tags assigned to this article:
magazine books abraham c mathews human rights magazine 23 march 2015 leila seth