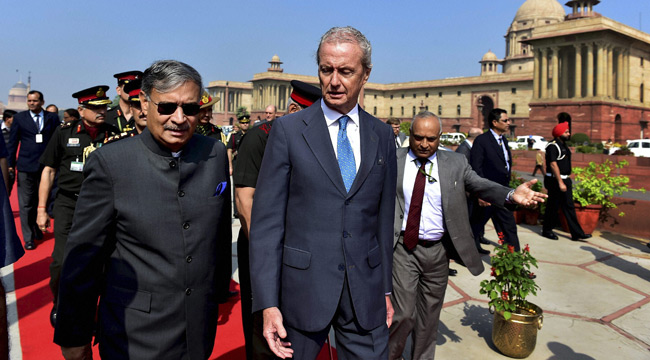 10 March, 2015
Print this article Font size -16+
India and Spain on Wednesday signed an agreement on 'Mutual Protection of Classified Information' to provide the framework for enhanced cooperation in the defence sector.
The agreement was signed following an hour long meeting between visiting Spanish Defence minister Pedro Moremes and his Indian counterpart Manohar Parrikar, defence sources said.
The Spanish delegation evinced a clean interest in participating in the Make-in-India initiative of the government in the defence sector, they said.
Explaining the agreement signed, sources said that this is the primary pact that a country agrees to before embarking on deeper talks on defence cooperation.
They said that the Spanish side was interested and "enamoured" by the Make-in-India initiative and raised a number of questions on the opportunity ahead.
Spain has over the years acquired expertise in various fields of the defence sector.
Sources said Spanish companies are interested in being part of the P75I, a project under which India plans to build six conventional submarines.
Both sides also agreed to work on enhancing bilateral defence cooperation.
The Spanish defence minister had last arrived in India in 2012 as part of the delegation led by the King of Spain. This is his first stand-alone visit as the defence minister to India. However, Moremes has visited India a number of times for trekking and mountaineering.
(PTI)
Tags assigned to this article:
news 8 spain defence manohar parrikar make in india pedro moremes submarines