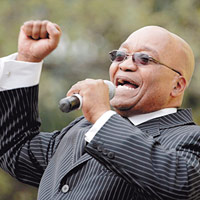 08 November, 2014
Print this article Font size -16+
South Africa suspended four top security officials on Friday, 3 May 2013 including two brigadier-generals, in a widening scandal over a plane chartered by a family with close ties to President Jacob Zuma using an air force base without proper permission.

The affair - dubbed "Guptagate" after the influential Indian-born Gupta family - has transfixed South Africa since the private flight landed at Pretoria's Waterkloof Air Force base on Tuesday, 30 April with nearly 200 guests for a lavish family wedding.

It has also shone an uncomfortable spotlight on Zuma's relationship with Gupta brothers Atul, Ajay and Rajesh, whose South African business empire stretches from mining and resources to aviation and technology.

In a news conference attended by six cabinet ministers, justice minister Jeff Radebe promised to find out how the plane was allowed to land at the base, one of South Africa's most important military sites.

"There was no executive authority granted for this plane to land. That is the bottom line," Radebe said. "Whatever permission was there was an unauthorised one."

The scandal has ranged from farce - border officials had to interrupt the four-day wedding at the luxurious Sun City resort to get guests to fill in belated customs forms - to a potentially serious diplomatic incident.

A top foreign ministry bureaucrat who helped secure landing rights from Waterkloof commanders has already been suspended, and Indian High Commission officials who went directly to the base commanders for landing permits are also in trouble.

"It is not normal that an official at an embassy goes to a government entity and starts soliciting permits," Foreign Minister Maite Nkoana-Mashabane told journalists.

She is due to meet the Indian ambassador on Friday.

"Due Courtesies"
India said no protocols had been breached and that the plane was carrying politicians from the Samajwadi Party, a regional ally of the Delhi government led by prominent national politician Mulayam Singh.

"Whenever senior government functionaries travel, we request due courtesies from the local authorities and in this instance too the same practice was followed," foreign ministry spokesman Syed Akbaruddin said.

So far, the episode has failed to suck in Zuma, who missed the wedding due to a state visit to the Republic of Congo, but it is seen as another example of the influence-peddling and cronyism that the president's critics say has become endemic since he came to power in 2009.

Two of Zuma's children have served as directors of a number of Gupta companies, according to South Africa's companies database, and the family is a major financial backer of the ruling African National Congress (ANC).

"This is bigger than whether or not the bags were searched. It tells us who we are," Johannesburg's Star newspaper said in an editorial. "If you have money and friends in powerful places, you can do as you wish."

In addition to the suspended base commanders, Radebe said two policemen had been arrested for moonlighting as private security guards in the luxury car convoy that took the wedding guests from the airbase to Sun City.

The police have also opened a criminal case against a Pretoria car hire firm for the illegal use of flashing 'blue lights' in the suite of BMWs in the convoy.

The plane, an Airbus 330-200 owned by India's Jet Airways, has been moved from Waterkloof to Johannesburg's OR Tambo international airport.