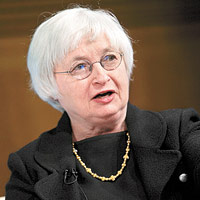 08 November, 2014
Print this article Font size -16+
Federal Reserve Chair Janet Yellen said policymakers have the necessary tools to raise interest rates at the appropriate time and the central bank will continue to hold a large balance sheet “for some time”. Discussions on exiting from record monetary accommodation now under way “are in no way intended to signal any imminent change” in policy, Yellen said at a press conference in Washington following the central bank’s policy meeting. The Federal Reserve “will continue to have a very large balance sheet for some time”, she said. The Fed is testing new tools that would allow it to keep a large balance sheet even after it raises short-term interest rates, a step policymakers anticipate taking next year. Meanwhile, the Federal Open Market Committee has cut another $10 billion from its easy money easing programme, bringing the Fed’s monthly bond purchases to $35 billion.

Fruity Fight
The US Supreme Court has ruled that drink producer POM Wonderful can sue Coca-Cola over allegations that it misled consumers over its marketing of Minute Maid pomegranate blueberry juice. POM had filed a lawsuit against Coca-Cola saying it had misled customers by selling a pomegranate blueberry juice even though it had 0.5 per cent of the two juices. POM, which makes a drink that is 100 per cent pomegranate, said the label would hurt sales of its own product. Although, the case pitted two businesses against each other, POM hailed the ruling as a victory for consumers.

True Takeover
US medical device maker Medtronic has agreed to buy Covidien for $42.9 billion in cash and stock, and move its executive base to Ireland, which will help lower its corporate tax burden. While the deal will allow Medtronic to reduce its overall global tax burden, the Minneapolis-based company said it was driven by a complementary strategy with Covidien on medical technology rather than tax considerations. “The real purpose of this, in the end, is strategic, both in the intermediate term and the long term,” said Medtronic chief executive Omar Ishrak.

Filling Up
Oil major BP will sign a deal worth around $20 billion to supply China National Offshore Oil Corporation (CNOOC) with liquefied natural gas, BP chief executive Bob Dudley said. The agreement between the two companies will be signed in London, as British Prime Minister David Cameron is due to announce a series of trade deals to coincide with the arrival of the Chinese Premier Li Keqiang. BP already supplies CNOOC with LNG from Indonesia.

Weaving A Web
Alibaba’s purchase of the rest of UCWeb will help China’s largest e-commerce firm boost its mobile-search business, as it prepares for an initial public offering. UCWeb is valued at more than double the $1.9 billion paid by Baidu, last year, for 91 Wireless Websoft, according to Yu Yongfu, president of Alibaba UCWeb Mobile Business Group. Meanwhile, the e-commerce firm has unveiled its first direct-to-consumer online shop in the US, looking to take on Amazon.com and eBay on their home turf.

The website, 11main.com, which is currently in beta, will feature a wide range of products, including “one-of-a-kind items, not available at mass merchants and other large e-commerce sites,” Alibaba said.

Tough Talk
Ukraine has rejected a Russian proposal that will reduce the price it pays Moscow for natural gas by more than 20 per cent, and ruled out paying its gas debts, until a pricing deal is reached. Remarks by the prime minister and energy minister have made clear that Kiev is not changing its stance at talks with Moscow, despite the threat of Russia cutting supplies to Ukraine, if no deal is reached — a scenario that could disrupt deliveries to Europe. The dispute is at the heart of a crisis between Moscow and Kiev, and failing to resolve it will set back peace moves after weeks of violence in eastern Ukraine, where separatists are demanding unification with Russia.

Bidding War
Siemens and Mitsubishi Heavy Industries are trying to beat a bid by US conglomerate General Electric for Alstom with an offer that would focus on alliances with the French engineering group, sources said. The German and Japanese groups said they were discussing a joint offer for Alstom’s energy assets that would compete with GE’s $17 billion proposal, and would be worth around $9.8 billion. The plan would not be a direct buyout of Alstom’s power assets, but would rather set up one or several joint holdings in power. Siemens was still ready to give Alstom its train business as part of the deal, although the French group has so far not shown much interest in such an asset swap, according to sources.

Under Scanner
European officials are investigating whether Apple and Starbucks are dodging taxes under arrangements with the Irish and Dutch governments. A unit of automaker Fiat, and its tax affairs in Luxembourg, are also covered by the in-depth probe announced by the European Commission (EC). Based on a preliminary analysis, the EC is concerned that transfer pricing arrangements in each case could underestimate taxable profits, potentially giving an unfair and illegal advantage to the companies.

Offloading Shares
Royal Dutch Shell said it will sell the majority of its stake in Australia’s largest independent oil and natural gas producer Woodside Petroleum in a deal worth about $5 billion after taxes. Shell is selling an 18.6 per cent stake in Woodside, shrinking its holding to 4.5 per cent from 23.1 per cent. The Anglo-Dutch company aims to sell about $15 billion in assets globally by the end of next year, and has already raised $2.6 billion from the sale of an Australian refinery and network of filling stations. So far, the company has sold around $12 billion of assets
in Australia, Europe, Nigeria and North America.

Losing Game
Intel lost its fight against a record $1.4 billion antitrust fine in a ruling that may embolden European Union regulators in other monopoly investigations. The EU’s Court rejected Intel’s attempt to overturn the penalty for giving rebates to computer makers that favoured its chips and shunned the products of its main competitor, Advanced Micro Devices. “None of the arguments raised by Intel supports the conclusion that the fine imposed is disproportionate,” the court said. The size of the EU penalty “is at the lower end of the scale” for possible fines, it said. Intel’s defeat is a timely boost to the Brussels-based European Commission, which is embroiled in investigations over abuses of market power across the continent.