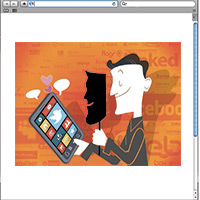 08 November, 2014
Print this article Font size -16+
Yes, we all know that teenagers are fleeing Facebook. Even as their moms, aunts, uncles and grandparents take over FB, teenagers who shy away from the limelight are finding newer networks.

Many of them are making a beeline for Anomo, a social app for introverts, currently available on both iPhone and Android, where everyone starts with anonymous avatars — though you do have to give your gender and age.

You have a choice of cute avatars to take on. The USP of the new social discovery network  www.anomo.com is that first impressions are based on more than a simple photo. So, there are some icebreaking questions through which you find other users you are compatible with. Almost 95 per cent of Anomo’s users are aged between 15 and 20. And, apparently, the app is opened 18 times a day on average by users as opposed to 14 times a day by Facebook users.

At a time when there is a crackdown on anonymous profiles on social media, doesn’t this app go against the transparency diktat? Founders James Sun and Benjamin Liu feel that assuming avatars will help teenagers ward off potential online hazards, safeguard privacy and yet not feel rejected.

BRAND BUZZ
Dislike, Donate and Edit
Finally, Facebook and Twitter are listening to their users’ clamour for additional features. While FB is trialling the ‘dislike’ button, albeit only for its messenger, with a thumbs down sticker, Twitter is trying out an edit feature.

FB has also unveiled a ‘Donate Now’ button to help non-profit organisations take contributions. And, its philanthropic gesture might have attendant benefits for it as well — for the Donate button will collect credit card numbers and billing info that could come in useful for FB’s own e-commerce ventures.

DIG THE DATA
Rise Of The Bots
The Web has been overtaken by bots: 61.5 per cent of the traffic on the Web in 2013 comprised non-humans, a 10 per cent annual increase, according to application delivery platform Incapsula

Clear Thrust
Seventy-six per cent of marketers planned to increase strategic efforts on social media and social networking sites in 2013; 68 per cent also planned to focus on blogs, according to survey firm Inavero

Peer Preference
Fifty per cent of all social media users under 35 years follow their online friends’ product and service recommendations, according to technology portal TECHi

Arvind Kejriwal
@ArvindKejriwal
Leader, AAP
What does this jokepal achieve? CBI has not been made autonomous.
CBI will continue to be under govt’s control.