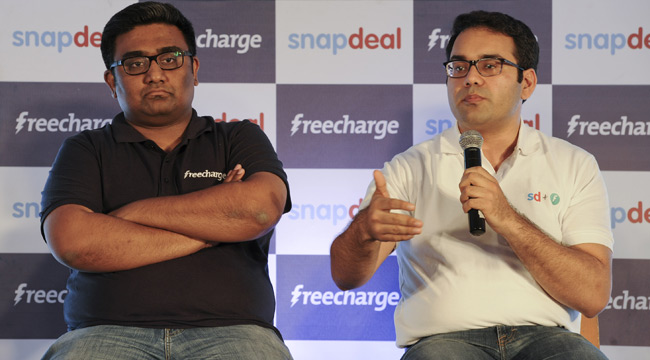 05 June, 2015
Print this article Font size -16+
E-retailer Snapdeal.com said on Wednesday (8 April) it bought online mobile recharge firm Freecharge for an undisclosed amount in a bid to boost its reach in the fast-growing mobile transactions business.
Snapdeal, backed by SoftBank Corp, competes with Flipkart and Amazon.com Inc's India unit in the country's online shopping market, which is expected to be worth $102 billion by 2020, according to Morgan Stanley.
Easy availability of smartphones and cheap data plans have resulted in most of those transactions to be made via apps, where consumers use their mobile phones for everything from buying clothes to booking movie tickets.
Freecharge allows users to top up amounts on their mobile phone or internet connections and get coupons as reward for using its service.
Snapdeal Chief Executive Kunal Bahl said 1 million mobile transactions would take place daily once the companies are combined. About 75 percent of all Snapdeal transactions now are through mobile users, he said.
Freecharge would remain an independent platform even after the deal, which is expected to close within the next 6 months, Bahl said, without specifying how much much it paid to buy the mobile recharge firm.
With the acquisition, Snapdeal would become "the largest mobile commerce company in India," the company said in a statement.