Smart Shoes Of The Future 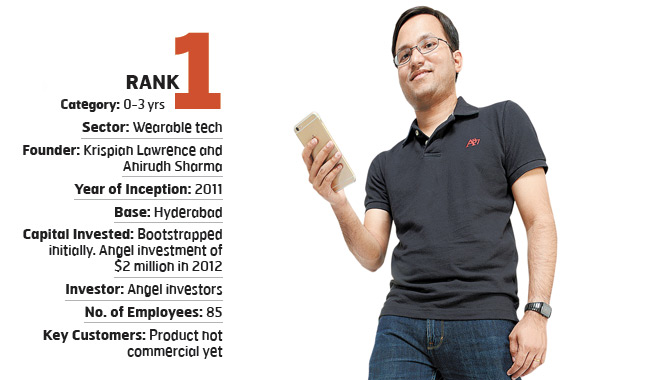 10 June, 2015
Print this article Font size -16+
Unlike so many cocksure entrepreneurs today, 30-year-old Krispian Lawrence, CEO of Ducere Technologies, comes across as a breath of fresh air: not worldly wise and not a ruthless go-getter, but rather earnest, warm and passionate about what he’s doing. Of Lawrence and his partner Anirudh Sharma, you might say they have their hearts in the right place —in this case, their shoes.
Lechal, or “take me along” in Hindi, is a pair of Bluetooth connected smart shoes that buzz the wearer to go left or right, navigating the way to a destination. It’s that simple. And yet it isn’t. Because the idea has such potential. The world’s first smart shoes caught the attention of the media worldwide when they were first announced by Hyderabad-based Ducere Technologies, the company set up in 2011 by Lawrence and Sharma, to create “intuitive, unobstrusive, and user-friendly wearable technology” solutions. Lawrence and Sharma are graduates of the University of Michigan and the Massachusetts Institute of Technology. Their company currently employs 85 people. Ducere started by bootstrapping, but raised $2 million in investment to start with and are now looking to raise more funding, not for product development but for scaling up.
Shoes With ‘Vision’
The first of the wearable solutions to come out of Ducere was born out of compassion. During a visit to Begaluru, Lawrence and Sharma were idling around when they happened to notice visually impaired people moving about, trying with some difficulty to find their way around. The rest was serendipity: the idea came up for a pair of navigational shoes that uses haptic (vibration) feedback to communicate with the wearer. Rather than reinvent the wheel, they put together existing technologies but in a wholly innovative way. The shoes are fitted with Bluetooth and sensors. The wearer’s mobile phone is fitted with a Lechal app. And the shoes and phone talk to each other. With these connections made, a person with an eyesight problem can allow the phone with its maps and other information, and the shoes with their vibration, to guide him anywhere that’s findable on the map.
Left to itself, technology would have solved the navigational problem using audio cues. Lawrence is totally tuned in to what would work better for someone with eyesight problems. “For visually impaired people, the sense of hearing compensates by being the primary and sharper sense,” he says. “But you wouldn’t want to take that up and keep it focused on audio feedback from the phone. Instead, the person needs his best sense free for other cues. Haptic uses the sense of touch, separately from audio.” Ducere worked with the LV Prasad Eye Institute to research how haptics works. “Our product design is all about inclusiveness,” says Lawrence, “If something is designed well, it should not discriminate about who’s using it. It’s not about different technology for the differently abled but one technology for all.”
Once the idea took hold, Lawrence and his team began building on it, adding simple and intuitively powerful features such as being able to use a button on the phone to control the app and the feedback the user will get. Two presses, for example, will trigger a specific action. Feedback was built in to prevent a user from bumping into objects; another to vibrate long or short to signal an upcoming directional change.
Going Mainstream
The possibilities began to unfold as it became increasingly clear that shoes could be as smart as you make them and that anyone could use them. Straightaway, there are health and fitness use cases. The shoes can count the wearer’s steps, time a run, track activity, and do anything else, for that matter, that one can programme it to. Deciding to take the connected shoes mainstream, he started the Lechal Initiative wherein shoes for the visually challenged and the blind can be subsidised by sales to general consumers. A second product, under the same brand name of Lechal, is a set of insoles to be used with any shoes a user can fit them into. The original Lechal shoes are solid red and black, but if that doesn’t work for some people, they can use the insoles. The shoes even have an accessory — an interactive charger that responds to a snap of the fingers and tells you the battery status.
Future Footprints
But will consumers readily adopt these connected shoes? Vishal Gondal, CEO of GoQii, a wearables company that sells a fitness band with coaching services, sums up Lechal’s biggest challenge: “It’s a great idea, but the biggest problem will really be getting users to adopt this. That’s the part that’s never easy. How are they going to do it?” Wearable technology has indeed often been accused of having no real killer application, making it a matter of curiosity, but not necessity. Although this may be changing gradually, with fitness and fashion both becoming reasons to use wearables, it is still common to find users abandoning their devices after a short while of use.
But Lawrence’s belief in the connected future of footwear is strong. “Just as we take it for granted that a phone can send email or let you play a game or do the number of things it does today, it will one day be a matter of fact that shoes will have the ability to communicate with users for many reasons, navigation being only one of them. “Shoes are like a natural extension of the body,” he says, “You can’t leave home without them. So it’s only fitting that technology should be built-in.”

Ducere Technologies has a software development kit ready for developers to go ahead and explore more use cases for the Lechal shoes. One such use is already in the making: fall detection. If a visually impaired person or an elderly person uses the shoes and is in danger of falling for some reason, a detection feature should communicate to the phone and quickly send out an alert to get help. It is applications like these and more that Lawrence would like to see incorporated via apps for the Lechal shoes. For instance, indoor navigation is an issue that needs to be addressed. Buildings like airports or hospitals or supermarkets are difficult to navigate. Ducere is already working on a solution with which a map is instantly created when a person walks into a building. After that navigation is as usual, with haptic feedback.
Lechal shoes and insoles, while a brilliantly simple idea, haven’t started walking yet. Pre-orders are just beginning to be fulfilled and the company is a long way off from flooding the market with smart shoes as it has plans to. Production is on and training is in progress. Distribution is to be “everywhere” and there are some tie-ups with footwear companies, but until Lechal shoes are on the feet of enough consumers, we will not know how well they will be received. One thing is, however, for sure: Lechal is only the first of a line of innovative products coming from Ducere. Three of these in new categories are lined up for release after the Lechal shoes.
(This story was published in BW | Businessworld Issue Dated 29-06-2015)
Tags assigned to this article:
mala bhargava magazine entrepreneurship hottest young entrepreneurs magazine 29 june 2015 young entrepreneur awards 2015 ducere technologies krispian lawrence