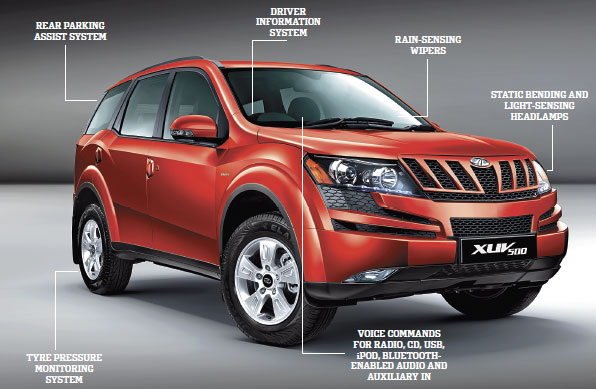 A Thinking Car
Typically, different cars have different requirements and separate companies meet each of these. For instance, M&M's XUV500's engine control unit (ECU) is built by Bosch, and the mobile platform by Delphi. "An average of 20 chips are integrated in each ECU of a car," says Rajan Wadhera, chief executive of technology and product development division at M&M. "A vehicle can have 6-40 ECUs. For the current generation of SUVs it is 120-500," says Wadhera.

These chips, categorised as microcontrollers, digital signal processors (DSPs), analog and digital integrated circuits (ICs), memory chips, etc., are assembled as an ECU, which controls complex mechanical systems such as engine and transmission. But the real complexity lies in the software, and companies such as Bosch, Continental and Delphi work on algorithms to make the components ‘think' — inject the right amount of fuel or deliver power to all cylinders proportionately, etc.

"Now, it takes only 12-18 months for a software's cycle to be complete. The car is going to be the fourth display (after television, personal computer and mobile phone)," says Nambi Ganesh, director of Delphi's technical centre in India. Developing a new car from concept to production takes about three years; half of this goes into software development alone. Delphi, which has developed General Motors' Chevrolet Beat's electronic cluster and Tata Aria's infotainment system, has worked on automobile app solutions on Microsoft and Apple platforms.

A group of 200 engineers at French auto component company Valeo's Chennai centre is busy developing a rain-light tunnel sensor, a wi-fi rear camera and a low-cost intelligent parking assistance system. "Innovation is not for luxury cars. It is more about fitting into a particular cost," says Derek De Bono, the group product marketing director at Valeo, which develops intelligent LED lights and innovative interface systems and whose LED-based lights are used by Volkswagen in the Polo. "These systems are being built for low-cost cars in India," says De Bono. He adds that a lot of sensors can go into cars priced around $10,000. Globally, about 58 per cent of Valeo's revenues come from safety, powertrain and thermal systems.

At Continental India's Bangalore plant, 600 engineers are building a module-recognition software. Some of these are for M&M's SUVs. "We are writing algorithms for torque sensors, controllers and position sensors," says Joachim Nell, who heads the technical centre in India and is also the director of affordable cars strategy at Continental India. While M&M uses its body controllers, the mandate for Nell's team is to build electronics for low-cost cars.

With so much opportunity for growth in this space, software firms, too, have jumped in. "We are working on building the next generation infotainment experience," says John Slosar, general manager for automotive electronics at Wipro Technologies. Wipro's key focus for the automotive segment is connectivity and infotainment systems — the ‘brain' that allows the driver to control both car functions and interactions with the outside world. For Tier-I suppliers, Wipro has connected the entire infotainment value chain, involving information capture, transmission, storage, distribution and presentation to enable such an experience.

"The user experience, especially in information services and entertainment, is in a state of rapid metamorphosis," says Kumar Kandaswami, senior director at Deloitte. Software and electronics even decide engine parameters such as fuel consumption and emission, airbag deployment and seatbelt functions. "It is the software element that plays a role in branding the car," says Vijay Ratnaparke, managing director of Robert Bosch Engineering and Business Solutions. Gen-Y "wants cars to have software upgrades every six months", he adds.

While initially electronics in cars were used only to reduce emission, now it is about user comfort. Chennai-based Wabco India has developed an electronic air suspension system that can detect the kind of terrain the vehicle is on and accordingly balance the tyre load, thus reducing fuel consumption. "Electronics in cars have matured because safety and efficiency have become critical," says P. Kaniappan, a whole- time director at Wabco Vehicle Control Systems. The company has developed an autonomous braking system, in which the vehicle is fitted with radars and speed sensors. It can read, in real time, the distance between a car and the vehicle ahead. "This kind of a system will be compulsory in Europe from 2013," says Kaniappan.

As a Tier-I player, Wabco believes automobile software is the only thing that will bring in the revenues, and is creating affordable systems for the Indian market as local production will make sense if there are high volumes.

Innovation at an affordable cost seems to be the mantra. Pune-based KPIT Cummins has developed the Revolo hybrid kit, a plug-in battery pack attached to the engine. The parallel hybrid ensures that the motor and engine work simultaneously all the time. The load-sharing is seamless and does not need intervention. The kit works on regenerative braking and goes from fuel to electric automatically. The kit's sensor helps save on fuel consumption. "It took us two years to create this system," says KPIT Cummins' Pandit.

Safety and security, too, form a large part of the software content. Market leader in passenger cars, Maruti-Suzuki, has embedded a factory-fitted anti-theft immobiliser system in almost all its models. iCATs (intelligent computerised anti-theft system) is an advanced electronic system installed in the vehicle, which works on digitally encrypted codes and is, hence, tamper-proof. "With smart electronics such as a navigation system, real-time graphic system and interactive management system, the penetration has gone up," says C.V. Raman, executive officer, engineering research, design and development, Maruti-Suzuki India.

break-page-break
According to Ford India, Indian customers look for the best but at an affordable cost. The Figo — Ford's first foray into the small car segment, which forms 70 per cent of the passenger car market in India — has Bluetooth connectivity, intelligent boot release and an iPod-compatible audio system. "This shows how Ford India has incorporated new digital technologies and smart design," says John Lonsdale, vice-president, product development, Ford India.

Ford works on the Microsoft Windows Automotive Embedded Platform, which enabled its engineers to standardise infotainment systems for its ‘One Ford' strategy. Globally, it has been working with Microsoft on developing the communications and entertainment system, SYNC, which will integrate most Bluetooth-enabled mobile phones and digital media players, providing hands-free cellphone operation and music selection using voice commands. Microsoft is betting big on this idea. "By end-2012, 90 per cent of the vehicles will be connected vehicles," says Sanjay Ravi, managing director of worldwide high-tech and electronics industry at Microsoft. Infotainment platforms, starting from accident alerts to supporting remote diagnostics, are something that Microsoft is actively working on with global auto majors. "The innovation is happening out of India," adds Ravi.

The Future
Car components such as injectors, ECUs and pumps are getting smarter every year. "Integration of software and hardware has been happening for a very long time," says Ratnaparke of Robert Bosch. In the future there could be start-ups specialising only in software. "All vendors are state-of-the-art in hardware and are now completely focused on software," he says. Bosch has over 10,000 people at its India centre. It is working on windscreen wiper systems that can measure rain and speed up accordingly.

Bosch is also working on augmented reality. Imagine a screen that you can swipe across to get the desired display. "We are already working on the next-generation powertrain design where the engine as a whole thinks," says Ratnaparke. Bosch has also written the software algorithm for the Nano, where the firing has been patented. This year, Bosch expects to file 80 patents.


With so many of a car's functions depending on software, it has to be foolproof. There have been user claims of unintended acceleration due to faulty software. Some global auto majors have had to suffer recalls and lawsuits.

A key issue to address will be liability when cars become intelligent. How is the law going to take its course  is a question that industry experts will need to keep in mind before mass producing such technology. In the US, a Tier-I supplier is responsible and can be sued by the consumer. In Mumbai, a few years ago, General Motors had to compensate a person for a car that would not start. After a prolonged three-year battle in the consumer court, the company paid up Rs 12 lakh. However, that was in the past and innovation is here to stay. Component makers and car manufacturers are betting on it.