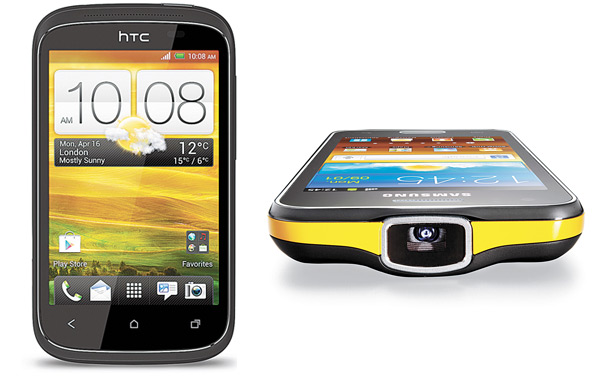 08 November, 2014
Print this article Font size -16+
A Great Palm-Fit
The HTC Desire C is about the size of the iPhone but feels smaller. It has a 3.5-inch 480 x 320 screen on the front, and its soft and rubberised back with its gentle curved sides makes it hold-friendly all around. It feels just right in one’s palm, in fact. At first I thought it was a unibody device, but some investigating revealed otherwise. Being the size it is places the Desire C in the budget phone category — although it has a Rs 14,999 price tag. This phone doesn’t make a style statement. It’s quiet and accented here and there, but lacks the glitzy premium feel. It’s meant to do the job rather than make you look good. Sometimes it seems as if features have been taken in and out of smartphones quite at random. It has Android’s Ice Cream Sandwich and HTC’s Sense 4.0 interface, with some tweaks. The Desire C runs on a 600MHz Qualcomm Snapdragon processor, which isn’t much these days. The RAM is a standard 512MB. Storage is a low-end 4GB, so you’ll need to buy an SD card. Adding to the Android 4.0, we also have other perks that are missing on even the larger premium smartphones. A removable battery (in red, at that), a micro SD slot, and a standard sim — micro sims have become a fashion on premium phones. What’s not so great is the 5MP primary (and only) camera, pulling it down a few notches. The camera has neither flash nor
auto-focus. Clearly, it’s sort of just there. The battery is a 1200 mAh and adequate for what you’ll be able to do with the phone. Overall, a good intro-Android smartphone; one which will make for an everyday workable, no-fuss device.
Beam Me Up, Galaxy
Get ready for some serious ceiling gazing. Samsung’s Galaxy Beam GT-I8530, the projector smartphone, is finally in India and, luckily, one doesn’t pay a huge premium for what you might think is a novelty or specialist phone. At Rs 29,999 (please, let’s call that 30,000) it’s doable, if you can think of interesting things to beam around and enough situations in which to use projection. If you get a good deal on it — why not.
A tailor-made Beam situation, if we go by the blissful-family promo video, would be when you lie back in bed with your kid and tell a bedtime, story complete with pictures or video up on the ceiling. Children will love that, though I’m not sure it’ll put them off to sleep. The Beam has a solid feel without being too heavy. The body has a yellow strip running around it, giving it a sporty look. It also has a nice soft rubbery back and a 4-inch screen, but just a 5MP camera. One would have thought the projector would be paired with a better camera so you have more personal material to beam. The Pico projector is on the top of the phone (where else) and has a dedicated button to beam your screen instantly. The projector is 15 lumens and can give you a 50-inch display, projecting up to 2 meters. That’s as big as a big TV, though not as bright and crisp. The Beam is an otherwise typical Samsung Android phone. Amazingly, it still runs on Android 2.3 or Gingerbread — now two versions old. It’s powered by a 1 GHz dual-core processor and 768 MB of RAM. Internal storage is 8GB but there’s a micro SD slot so you can increase your space up to 32GB. There’s a 2000mAh battery which should give over 3 hours of video-playing and beaming. Really worth considering if you don’t mind your phone being a few versions behind on Android.