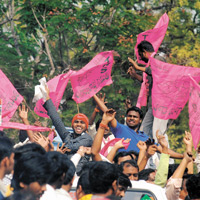 If things go according to plan, Andhra Pradesh (AP) may be looking for a new capital. The division of AP — the fourth instance after Uttar Pradesh, Bihar and Madhya Pradesh — throws up some interesting insights into the relationship between economic growth and disparities within states, particularly the fate of the parent state after its division.

In a liberalising economy, the state government has a bigger impact on growth than that of the market, a notion that is counterintuitive. Awarding contracts, choice of location for big private sector projects, the setting up of special economic zones, land acquisition and compensation policies, all play a significant part. And let's not forget about patronage extended to business groups.

In the case of Jharkhand, Uttaranchal and Chhattisgarh, their creation as states appears to have released considerable pent-up potential. Just take a look at the numbers for gross state domestic product (GSDP) in the Eleventh Plan document. All three states grew well above target rates set for the Tenth Plan period (Jharkhand at 11.1 per cent against a target of 6.9 per cent per annum, Uttaranchal at 8.8 versus 6.8 per cent and Chhattisgarh at 9.2 against 6.1 per cent).

As regions, they appear to have contributed much more to the parent state's growth than has been estimated. Post separation, and in the same period, Bihar grew at 4.7 per cent versus a target of 6.2, Uttar Pradesh grew at 4.6 against a targeted 7.6 per cent and Madhya Pradesh at 4.3 against 7 per cent. When it comes to states, it's not about economies of scale.