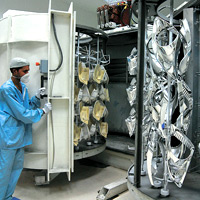 Picking out a trend or a thread from the index of industrial production (IIP) numbers is like trying to untie the Gordian Knot. Here's a sample: Industrial activity in September grew at 9.1 per cent over September 2008; but was low compared to August in which the IIP grew at a (revised) 11 per cent rate over August 2008. Put another way, while IIP growth was good year-on-year, it was not as good month-on-month. In fact, some of the steam seems to have been taken out; on a seasonally adjusted basis, sequential growth momentum fell 1.4 per cent from August; quarterly momentum softened, too.

The infrastructure index — which accounts for about 27 per cent of the IIP — numbers that were released earlier had shown that growth there slowed to about half the pace in August, as did consumer non-durables; but consumer spending in the festive season, which grew 22 per cent in August and September over the same months in 2008, may have helped offset the impact of slowing momentum and a weak monsoon. In short, growth will make haste slowly.  Alexander the Great cut through the Gordian Knot with a single stroke of his sword; we will continue to tie the pieces together for an economic read.