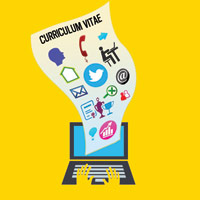 08 November, 2014
Print this article Font size -16+
Guess what was the most in-demand skill of 2013?  If you go by LinkedIn’s annual ranking of hottest skills, then social media marketing topped the charts in the year gone by. It beat mobile development and cloud computing. So, all those who are still sitting on the fence, the verdict is out. There’s no choice. Since you can’t beat it, you might as well join it in 2014.

2014 is also the year when social CVs will speed up the demise of the traditional CV. Obituaries of the traditional CV have already been written. According to Vala Afshar, CMO and chief customer officer for Enterasys Networks and an influential tweeter and blogger, the Web is already the new curriculum vitae of potential hires, with social networks the mass reference. Afshar claims to have walked the talk and refused to accept resumes, preferring to look for candidates over social networks.

Skype Scythed
The first day of 2014 did not start well for Skype. The voice-over-IP service provider became the victim of a cyber attack by an outfit called the Syrian Electronic Army. Skype’s social platforms — Twitter, blogs and Facebook — were hacked, allegedly because it was believed to be sharing data with US surveillance agencies. The attack on Skype just goes to show that even as social media properties are climbing popularity charts, they have to contend with an ever-present threat of hacking.

DIG THE DATA
Social Share
Eighteen per cent of adults online in the US now use Twitter; 71 per cent use Facebook and 17 per c ent use Instagram, according to Pew Research. There is, of course, an overlap in shares.

Deep & Wide
The Netherlands has the highest penetration of social network users as a share of its population: 63.5 per cent of all residents are social network users. Norway is a close second at 63.3 per cent, according to social media intelligence platform eMarketer.

Toddlers Next?
It appears that Facebook’s popularity is not limited to any age bracket. According to digital media portal socialmediatoday, more than  five million Facebook users are under the age of 10.

Ronnie Screwvala
@RonnieScrewvala
Founder, UTV Group
The smartphone may be dumbing everyone down unless we use it selectively and not as part of our body