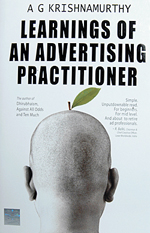 It is for those who still treasure the pursuit of knowledge and believe that when all is said and done, it is the simple truth that sets the haves apart from the have-nots. The book does not resort to any flash-and-dash gimmicks. Yet, it illuminates the obvious paths that lead to advertising that works. It advocates a simple approach and puts across several points that we must keep in mind when creating advertising, but do not because it runs against the grain of our current thinking, largely influenced by the hype that exists around our business. Students who wish to join the profession would do well to follow these simple advices, and practitioners, who would like to do a reality check on how to conduct themselves, will find this worth a read.

Ranjan Kapur is a Country manager of WPP, India