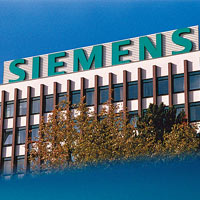 08 November, 2014
Print this article Font size -16+
Shares in the Indian unit of Siemens fell as much as 3.7 per cent on Wednesday after the German engineering conglomerate is looking to sell a 1.2 per cent stake in a deal that could raise up to $50 million. Nearly 4 million shares of Siemens India unit, in which the parent has a 75 percent stake, are being sold to investors in the price band of Rs 649.15 to Rs 698 a share, according to the term sheet seen by Reuters on Tuesday. The Indian unit of Siemens was last down 3 per cent at Rs 677.25.
Siemens AG's total stake in its Indian unit is valued at $3.2 billion (approx Rs 17, 600 crore) at the current market price. The share offering was launched on Tuesday and is expected to be completed by Wednesday, the term sheet said, adding HSBC was advising the company on the deal. A spokesman for Siemens' India unit could not immediately be reached by Reuters for a comment.
(Reuters)
Tags assigned to this article:
corporate finance news 7 stockmarket markets siemens siemens india