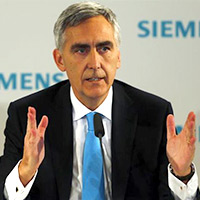 08 November, 2014
Print this article Font size -16+
Siemens Chief Executive Peter Loescher is to leave the company, four years before the end of his contract, after the German engineering group this week issued its second profit warning this year.

Siemens said in a statement late on Saturday, 27 July, that at a meeting on 31 July, the supervisory board would pass the decision on Loescher's early departure. "In addition, it will decide on the appointment of a member of the managing board as President and CEO," it added. Siemens, among Germany's three biggest companies by market value, did not provide further details.

Two people familiar with the matter earlier told Reuters that the majority of Siemens' 20-member supervisory board favoured finance chief Joe Kaeser as replacement for Loescher. The company declined to comment.

There have been persistent rumours over the past year that Kaeser, who was already on Siemens' management board when Loescher joined in 2007, had his eye on Loescher's job, though the two have repeatedly said they worked well together.

Late last year, when questioned about the rumours, the CFO said the two complemented each other like "light and dark".

Overpromised, Undelivered
When Loescher became CEO six years ago as the first company outsider to take the helm at Siemens, he was presented as a hero who would lead Siemens out of a massive bribery scandal that had tarnished its image and its finances.

But after tackling that task, Loescher started losing credibility as he repeatedly misjudged demand development in its main markets.

A bellwether of Germany's economy whose products range from gas turbines to fast trains and hearing aids, Siemens is suffering from the stuttering global demand that saw German exports fall the most since late 2009 in May.

In addition, Siemens' earnings have been hit repeatedly by one-time charges related to project delays and other issues.

Loescher was forced to put on the back-burner a strategy to increase annual sales by about a third to 100 billion euros last year, announcing instead a plan to save 6 billion euros over two years to compete with rivals such as General Electric.

The plan, which unions fear could affect 10,000 jobs, was meant to boost Siemens' core operating profit margin to at least 12 per cent from 9.5 per cent by 2014.

On Thursday, 25 July, the company scrapped that target, issuing a brief statement in which it cited lower expectations for how its markets would perform.

Siemens is scheduled to release third-quarter results on Thursday when analysts expect Loescher to elaborate on what prompted the company to scrap its margin target.