Mumbai (Maharashtra) [India], January 31 (ANI): Dressed as a cop, Bollywood star Sidharth Malhotra on Sunday shared a sneak-peek from his upcoming film 'Thank God'.
The 'Student of The Year' star hopped on to Instagram and shared a stunning picture, as he shot for a sequence of the film. 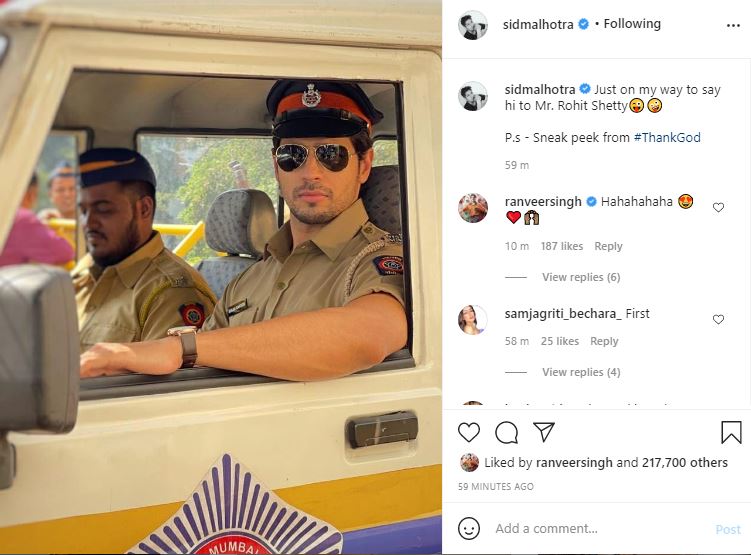 In the picture, Malhotra looks suave as he is seen dressed as a police inspector posing for the picture in a police patrol car. The actor is seen sporting a trimmed beard and moustache, while he channels his swag with black aviators.
Quipping that he's on the way to meet filmmaker Rohit Shetty (who has been directing cop movies including Singham, Simmba, Suryavanshi), Malhotra wrote in the caption, "Just on my way to say hi to Mr. Rohit Shetty( with wink emoticon)...P.s - Sneak peek from #ThankGod."
Celebrity followers including Ranveer Singh and more than 2 lakh fans liked the post on the photo-sharing platform.
The 'Simmba' star Singh also commented, "hahahahahha (lovestruck and red heart emoticons)".
'Thank God' that also stars actors Ajay Devgn, and Rakul Preet Singh went on floors on January 21. The shoot for the comedy film commenced in Mumbai.
The T-Series Films and Maruti International production is being bankrolled by Bhushan Kumar, Krishan Kumar, Ashok Thakeria, Sunir Kheterpal, Deepak Mukut, Anand Pandit, Markand Adhikari and co-produced by Yash Shah. (ANI)