New Delhi [India], February 11 (ANI): Bollywood actor Sidharth Malhotra on Thursday informed that he has joined the shoot of the upcoming flick 'Mission Majnu' in Lucknow.
The Shantanu Bagchi directorial which is being filmed in Lucknow went on floors four days back on Saturday.
The film also stars Telugu actor and 'Dear Comrade' fame Rashmika Mandanna.
The 'Ek Villain' actor shared the update of joining the shoot by sharing his picture and Mandanna's first character look from the movie.
He wrote, "A special one with a special team. #MissionMajnu, day 1," using a string of emoticons. In the picture, both the actors are seen posing with the script book of their film. 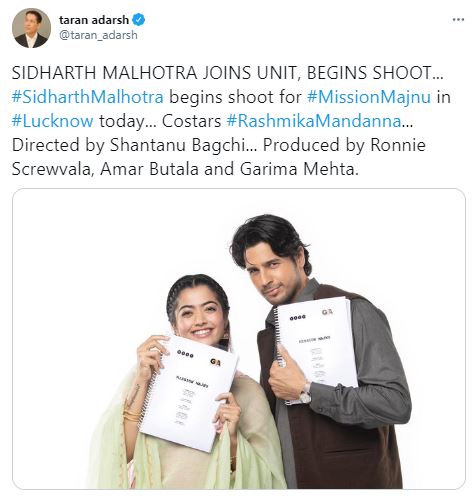 The film is inspired by real events set in the 1970s. It is the story of India's most courageous mission in the heart of Pakistan that forever changed the relationship between the two nations.
Written by Parveez Shaikh, Aseem Arora, and Sumit Batheja the thriller stars Malhotra as a RAW agent who leads the mission.
This film marks two important firsts - it will be southern superstar Rashmika Mandanna's highly-anticipated Bollywood debut and the directorial debut of award-winning ad filmmaker, Shantanu Bagchi. (ANI)