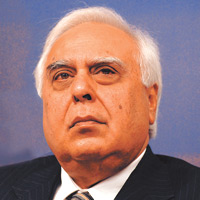 08 November, 2014
Print this article Font size -16+
Telecom Minister Kapil Sibal today ruled out bringing changes in cyber law in the wake of the controversy over the arrest of a man for allegedly targeting Finance Minister P Chidambaram's son on Twitter, saying the policeman in question was "ignorant". "Just because some people do not follow it properly, we cannot entirely scrap the law. Can we do away with penal code? We cannot," he said while participating in a session at the World Economic Forum on India here.

Sibal was responding to questions on arrests of businessman Ravi Srinivasan and cartoonist Aseem Trivedi and suggestions that sections of the Information Technology Act are being misused by police forces in the country. "Any offence where the maximum imprisonment is three years or less is bailable under the IT Act, so obviously this particular policeman is ignorant," the minister said.

He said any booking under Section 66A of the IT Act is a bailable offence and nobody can be sent to jail.

In September, cartoonist Trivedi was arrested for allegedly putting up banners mocking the Constitution during a rally of anti-corruption crusader Anna Hazare in Mumbai late last year and posting the same on his website.

Asserting that the government had no intention to control or regulate Internet in the country, Sibal said he himself had been a victim of vicious attack on the Internet.

"There are 500 things by the name of Kapil Sibal and there are some things which I really don't like. But I have not taken action. Someone had written that he wanted to kill me but I did not do anything. I am here, if needed someone can come and kill me," he said in a lighter vein.

Sibal also said since internet is a global phenomenon, laws within the country won't be able to tackle violations in the medium and wanted global countries to first define what is cyber crime and other issues which come up in the process.

The government is planning to convene another roundtable of all stakeholders concerned on how to go about issues like offensive content on the Internet and underlined that all concerned should work together in this regard, he added.

Stating that the government saw Internet as the "only medium" through which the entire population of the country can be empowered, he said there was no intention to control it.

"You cannot control Internet. It is a free flow of information and it is exceptionally significant for India. Internet is the real source of empowerment of people in India. Internet is growing and evolving. We need to take it forward," Sibal said.

"This government has done nothing to control or regulate Internet. We cannot control the Internet. Government is not interested in controlling or regulating Internet," he said.

The Minister also rejected suggestions that India was acting as a "police state" when it came to Internet, saying the government would not interfere in the functioning of the medium.

To a comment that he has the "internet killer switch" in his hand and he can trigger it on anytime, Sibal rejected the claims saying countries like US, Germany and France also can shut down internet anytime they desired.

Infosys co-chairman Kris Gopalakrishnan favoured some kind of regulation as the Internet user has "unprecedented" power and access in his hands.

Echoing similar sentiments, Vineet Nayar, Vice Chairman and CEO of HCL Technologies, said since Internet is at its "adolescent stage" in India, there need to be some control over the medium but it should not be completely controlled.