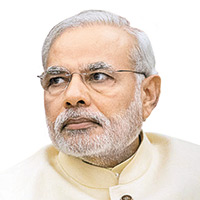 08 November, 2014
Print this article Font size -16+
Going by the details of assets and liabilities of the Union Council of Ministers uploaded on the PMO website, Prime Minister Narendra Modi’s assets have come down by Rs 40 lakh to Rs 1.26 crore since his last declaration in April. The decrease in his assets is attributable to two factors. One, his bank fixed deposits have reduced from Rs 32.48 lakh in April to Rs 17 lakh, and the other being the big donation he made to the cause of the girl child in May.

No Relief
The Karnataka High Court rejected a plea for bail by the imprisoned AIADMK supremo and former chief minister of Tamil Nadu, J. Jayalalithaa. On 27 September, she was sentenced to four years in jail and directed to pay a fine of Rs 100 crore in an 18-year-old case involving disproportionate assets to the tune of Rs 66.65 crore. Jayalalithaa, who stepped down following the indictment, is the first serving Indian chief minster to be convicted of corruption.
In A New League
Indian cricket captain and the face of IPL side Chennai Super Kings, Mahendra Singh Dhoni, is now a co-owner of  Chennaiyin FC — the Chennai-based franchise of the Indian Super League — which has

Bollywood actor Abhishek Bachchan and Vita Dani as other owners. Dhoni is the second active Indian cricketer to co-own a team after Virat Kohli, who is part of FC Goa, and the fourth to be a part of this eight city-based league. Sachin Tendulkar is a co-owner of Kerala Blasters FC, while Sourav Ganguly is one of the owners of Atletico de Kolkata.
Saying Ta-Ta To Tatas
S. Ramadorai, a veteran Tata Group executive credited with steering Tata Consultancy Services to becoming one of the world’s largest information technology services companies, retired on 6 October after attaining the superannuation age of 70. He stepped down from the position of  vice-chairman of Tata Consultancy Services, chairman of CMC (a subsidiary of TCS) and Tata Elxsi.

A Lavish Affair
True love may be priceless. But a gorgeous destination wedding in Venice, Italy, with fine food, top-shelf wines and multiple celebrations? Not so much. Hollywood superstar George Clooney and human rights lawyer Amal Alamuddin’s three-day wedding weekend, including their intimate ceremony at the Aman Canal Grande resort on 27 September, cost about $1.6 million, or a million British pounds.
A Step Up
UK-based pharma company GlaxoSmithKline has appointed Zubair Ahmed, senior vice-president for the Indian subcontinent, head of its proposed joint venture with Novartis AG in the Asia Pacific, Middle East and Africa. Ahmed, who joined the company in 2007, will assume his new role in the first half of 2015, following the closure of the deal.

Taking A Haircut
As Cisco commenced its global layoff plan, CEO John Chambers felt the squeeze. The networking giant cut Chambers’ total compensation by 22 per cent, from $21 million to $16.5 million. However, the compensation was still a step up from the $11.7 million he earned in fiscal 2012. The cut is said to be on account of financial performance.
Logging Out
The last of Infosys’ founders, Kris Gopalakrishnan, has stepped down from the company’s board, marking the end of an era for the 33-year-old company, which has grown into an $8.24-billion software exporter. Gopalakrishnan, along with six others including N.R. Narayana Murthy, founded the IT bellwether in 1981 with a capital of $250 and shaped it into a behemoth and India’s second-largest IT services company.
(This story was published in BW | Businessworld Issue Dated 03-11-2014)
Tags assigned to this article:
columnists prosenjit datta web exclusives opinion 5 bjp narendra modi prosaic view