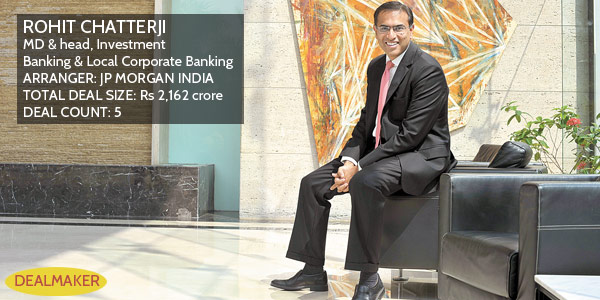 08 November, 2014
Print this article Font size -16+
JP Morgan India
Merchant bankers would call it the perfect issue. Shares worth over Rs 4,700 crore were placed in two hours’ time and that too at close to market price. The qualified institutional placement (QIP) for Axis Bank in January 2013 was a dream issue if one takes into account the ease with which merchant bankers — JP Morgan, Axis Capital and Citibank — raised the funds.

“Axis Bank’s issue was good for us. We could distribute the offering easily as there was good demand for private bank shares from the investor community,” says Rohit Chatterji, managing director and head, Investment and Local Corporate Banking, JP Morgan India. “We priced the issue (Axis Bank QIP) very close to the market price. It was sold in a matter of hours,” he adds.

Chatterji has reason to smile as the bulky Axis Bank placement helped his firm top the merchant banking league tables in the vertical in 2013. JP Morgan raised over Rs 2,100 crore across five placement deals last year. This feat earned JP Morgan a 17 per cent marketshare in the equity placement vertical and also BW | Businessworld’s Magna Award for the best institutional equity placement dealmaker.

“There is competition to get good quality deals. Such deals have to be timed well on the market. We have managed to get our share of large deals. We have participated in almost all deals valued in excess of half a billion dollars,” informs Chatterji.

Indian companies mobilised close to Rs 13,000 crore by placing equity shares (QIP and institutional placement programme) in 2013. “Most companies used the placement route to comply with the ‘minimum public shareholding’ guidelines of Sebi (Securities and Exchange Board of India). Issuers like Axis Bank placed shares to raise capital. Investors were receptive to equity issuances in the first half of 2013. The trend, however, reversed in the second half after news of the US taper filtered in. But, towards the end of 2013, markets again turned favourable for placement issues,” says Chatterji.

The success of a placement issue wholly depends on the prevailing market sentiment. During a downtrend, merchant bankers find it extremely difficult to place the issue with institutional investors. This is when they negotiate the deal by offering deep discounts on market price (prevailing stock price).

“Equity fund-raising is still a difficult proposition; FII outflows impact placement issues and other equity offerings in a big way. That said, quality issuances will sail through, if timed properly,” says Chatterji.

From a business point of view, placement issues contribute significantly to JP Morgan’s revenues. “We are in a cyclical business. I-bank mandates keep changing with broader market trends. As of now, debt capital-raising is more popular. Equity fund-raising is difficult in these times as there is some aversion to equity investments. But these may change… as I said, we are in a business involving several cycles. We advise clients on the basis of broader market trends and their requirement,” says Chatterji.

Axis Capital
Market mandarins predicted disaster when Axis Bank decided to acquire Enam Securities in 2010. They said Axis was over-paying for a business that was merely advisory in nature and the move would not yield the bank anything.

Four years later, Axis Capital (the amalgam of Axis Bank and Enam Securities) is among the few domestic investment banks that has managed to top league tables across verticals. In 2013, Axis Capital managed to corner a marketshare of around 17 per cent in the tightly contested institutional equity placement segment.

The investment bank has managed to mobilise Rs 2,133 crore by way of equity placements across five deals, which includes a share in the Rs 4,700 crore QIP by Axis Bank and smaller offerings from Adani Ports, ING Vysya Bank and Cholamandalam Investments.

Axis Capital’s performance in 2013 — which many contend was one of the worst years for equity fund-raising — helped the firm finish joint No. 1 with JP Morgan in BW | Businessworld’s Magna Award rankings.

“Last year was tough for placement issues. Indian companies were equity-starved and they were finding it difficult to raise funds as stock valuations had dropped significantly.  Adding to the complications, the market was quite polarised,” says Nilesh Shah, managing director and CEO, Axis Capital.

“On the one hand, you had pricey IT, FMCG and pharma companies, which did not require funds, but enjoyed a lot of investor interest. On the other, you had cash-starved companies with a bleak outlook and beaten-down valuations that did not evoke any interest in investors. It was very difficult for lead managers to meet management expectations and investor interest,” recalls Shah.

That perhaps explains the lower number of QIPs in 2013. There were just nine QIP issuances (excluding IPPs) worth Rs 8,000 crore.

“We had to work very hard to get these mandates. There is cut-throat competition in this branch of ECM (equity capital markets) business. Also, there is a lot of work to be done after getting the mandate. You have to time the issuance properly, identify the right investors and make the best pitch. You get only 45 minutes to present your case before an investor. You have to convince them in that time,” says Shah.

Axis Capital may not have the distribution prowess and cross-border capabilities of a foreign investment bank, but knowledge of the Indian equity market helps the firm tackle tough times. “We could give better insights to investors than most foreign I-banks. We could tell them everything they needed to know before investing — from retail financing rates to suppliers’ feedback. This knowledge base has helped us immensely over the past few years,” says Shah.

Placement issues need to be structured in a manner where both parties (the issuer and investor) benefit from the deal. Also, merchant bankers have to be wary of unscrupulous investors who may short the stock at high prices and then buy back (at discounted prices) during a placement.

“We try to bring in different types of investors while making a placement issue. So, it will be a combination of long-only funds, banks and hedge funds. We distribute shares evenly among these investors,” says Shah.

Large-sized placements may have three to five merchant bankers managing the issue. The work — research, documentation, stock exchange formalities, underwriting and distribution — gets divided among the participating merchant bankers. Merchant bankers charge 0.5 to 3 per cent of issue proceeds as fees.

“We have got various revenue streams; QIP is just one part of it. Nevertheless, it is an important vertical for us. We expect equity placements to gain popularity in the coming years. QIP is going to take off in a big way,” says Shah.