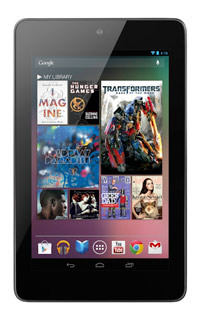 The recipe for success was simple enough. Set forth a cookie cutter Android army of slates to do battle with the iPad and regain tablet supremacy. Yet, after two years of watching OEMs make precious little headway, I can imagine Google tired of watching and decided to take matters into their own hands. And from this was born the Nexus 7 tablet, the first tablet to wear Google’s Nexus brand. Will this be lucky number seven for Google? Let’s find out!

Straight off, a seven-inch tablet? Isnt that the size that Steve Jobs once famously declared as ‘dead on arrival’? Have we not seen enough budget tablets sporting this size and form factor? Yet, where the competition faltered by packing in budget hardware and by trying to make a smaller tablet do all that an iPad could, the Nexus 7 makes a few correct decisions that distance itself from the rest of the Android pack. The 1280x800 pixel touchscreen on this device is downright gorgeous. It’s the best I’ve seen on a seven incher, and while it doesn’t pack in as many pixels as the iPad, it’s not that far off (216 ppi vs the iPad’s 264). Colours are balanced and not over-saturated, a common problem one gets to see on Android tablets these days.

While the Nexus 7 is made mostly of plastic and glass, build quality is good and it certainly doesn't feel cheap. The black rubberised finish around the back looks classy and really works when you’re holding the device in one hand. What’s interesting to note is that unlike a lot of Android tablets, portrait mode is the way Google is encouraging you to use the device, and that shows in the home screen being fixed in this orientation. Sure, your display will rotate for landscape use with applications, but its almost like Google’s telling you how to best hold this device. And they’re right – unlike the much heavier iPad, the Nexus 7 sits very nicely in one hand, and the smaller form factor and the excellent screen makes it a joy to read books, magazines and stuff on the web. I found myself reaching out for the Nexus 7 far more often than the iPad just for this reason alone.

And yet, this baby is no slouch. On paper, the specs for the Asus-manufactured Google-branded Nexus 7 are quite impressive. It’s powered by a quad-core Tegra 3 processor with 1GB RAM and starts with 8GB of onboard storage, and this tablet runs circles around the competing Android tablets. Connectivity wise, Of course, Wi-Fi and Bluetooth are present, and the Google Nexus 7 goes one step beyond by including a near-field communication (NFC) chip, supporting both Android Beam for pushing files between compatible devices, as well as Google Wallet for contactless payment, should that become commonplace in the near future.

And you get Android 4.1 Jelly Bean – yes, this tablet gets the latest version of Android out of the box while other manufacturers mull their timelines to move to Jelly Bean. This is a big advantage for the Nexus 7 – being a pure Google device, the software updates are prompt and unlike the Samsungs and the Sonys of the tablet space, you will not be stuck on older versions of Android.

Using Jelly Bean is a breeze on the Nexus 7, and in the two weeks I’ve been using this device, I’ve got to say this is one seriously impressive piece of kit. Jelly Bean has matured to become a capable tablet operating system, and the under-the-hood improvements such as "Project Butter"- Google’s initiative to tackle the lag and responsiveness issues that have plagued Android in the past – pay big dividends in the everyday usage of this tablet. Gone are the software performance issues, stutters, slow animations and overall sluggishness that plague a lot of much more expensive tabs.

Another neat trick I could totally get used to is the ability for the Nexus 7 to pop up a zoomed in window of a section of the screen – it’s an elegant solution to a problem many of us face when links are too close to each other and our fat fingers cant choose the right one. And if Siri was the star of the iPhone 4S, Google Now, the voice-enabled information service absolutely hits one out of the park – it works much faster than Siri and while it may lack Siri’s personality, it’s far more useful and more accurate than Siri in day to day use.

Now, consider this – the Nexus 7 retails for $199 for the 8GB version, or $249 for the 16GB version, if you’re lucky enough to pick this up from the US. While it isn’t yet available in India, it should be here by the year end and if the US price is any indicator, the Nexus 7 is quite frankly a steal when you compare it to what else is out there at the same price.

There are flaws, for sure. The Nexus 7 is limited to Wi-Fi connectivity, although there are rumors that a 3G version may hit the US as soon as October. There’s no rear camera – a bummer for some who like to use their tablet for travel photography. While battery life isn’t an issue with the built-in 4325mAh battery, Asus had to seal the back shut, which leads to another problem. With the relatively meager storage built in, the makers have chosen to leave out the microSD card slot that’s seen in many tablets today. This leaves you with only Wi-Fi-enabled hard drives or cloud storage to augment the storage of your unit. That said, the 8GB unit I picked up didn’t feel cramped until I started loading the device up with movies, so if you’re just buying this for books, games and general use, you can make do with the 8GB version. And Android still has a problem around tablet-optimised applications, in that many applications are still written only for Android phones and adapt to the tablet screen rather than being expressly written for it. Yet, make no mistake about it – this is how you make (and price!) a 7-inch tablet if you want it to succeed!

Note: the US-purchased Nexus 7 ships with $25 Google Play credit, but I’m not sure that benefit will exist in the Indian retail version.