Serving And Caring At Home

By bringing care services to the doorstep, Care24 is slowly becoming an integral part of the healthcare sector 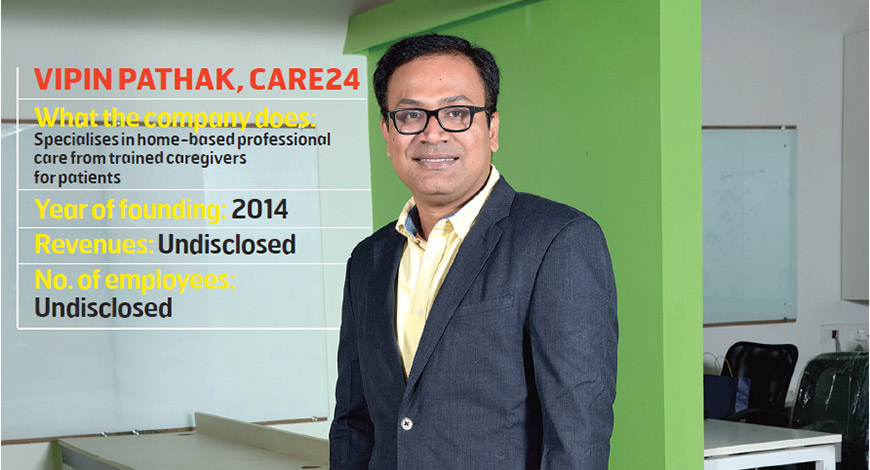 Vipin Pathak’s motivation to pursue his startup dream in the area of home care was not just his management degree or the rich experience that he earned from multinational knowledge houses such as PwC and EY. It was rather an emotional thought that he and many of his professional friends in the metros shared among each other about their old parents living in small towns who often struggle to travel to far-away places to access better healthcare.

Founded in 2014, Care24 is currently one of India’s top home care companies. Pathak, who is one of the winners of the 2017 BW Businessworld Young Entrepreneur Award, proudly says that his company serves as many as 1,000 patients a day at their home.

The health services company, which specialises in home-based professional care from trained caregivers for patients, was founded with the idea of bringing about quality medical care to patients at their doorstep. Since its inception in 2014, Care24 has successfully helped over 10,000 families to heal at home, with its wide network of expert and qualified nurses, physiotherapists and attendants.

A product of IIT Kanpur, Pathak started his career as a software engineer at Financial Technologies and quickly moved up in his career to become a business consultant at PwC, and later a manager at EY.

However, it was his calling to serve the community that made him launch Care24. “We have been continuously growing every single month in the last three years of operations. From serving our first patient in March 2015, we have been serving more than 1,000 patients a day,” says 35-year-old  Pathak.

According to him, the key changes that Care24 could bring into India’s home care market practices include standardisation of care, tech-driven service delivery and reliability of service. “With the increasing market response, we are looking to launch more customised and comprehensive plans for critical care for certain conditions like stroke, Alzheimer’s, cardiac and cancer care. We shall be adding step-down and ICU care with remote monitoring soon in the market,” he said.

The company has served over 35,000 patients so far and is profitable in operations. Its plans are currently aimed at creating a strong patient-care brand and scale with profitability. “We are going to deepen our growth in Mumbai and Delhi with adding more services and conditions specific plans. In 12-18 months, we would be offering our services in four more cities,” Pathak said.

“With the expansion to four more markets, including Bengaluru, Hyderabad, Chandigarh and Ahmedabad, within the next one year, we plan to take the patient count to around 2,500 per day from the current 1,000 per day,” he added.

The company had raised $4 million in its Series A round led by venture capital firm SAIF Partners, and $350,000 from India Quotient in 2016.

As an emerging service industry, the home healthcare segment is quickly picking up steam in India. Care24, which is one of India’s pioneering venture capital-backed startups in this space, could significantly contribute to expansion of this sector,  and provide the hospital-based healthcare services to patients without having to move them from the comfort of their homes.

Growth potential: World home healthcare market is expected to reach $349.8 billion by 2020 from $227.5 billion in 2015. The market grows at an annual growth of about 9 per cent. Over the past few months, the technology-backed healthcare services segment has been witnessing an increasing trend among startups. These are largely in the areas of hospital management systems, doctor discovery, delivery of medicines, and home healthcare services.