Sensex Tumbles 400 Pts, Re Inches Towards 65 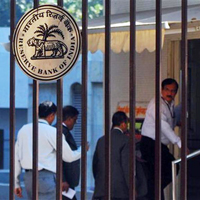 08 November, 2014
Print this article Font size -16+
The BSE Sensex fell around 400 points and the Nifty slumped over 100 points on Wednesday, 21 August. The Bank Nifty was off highs, and was down 0.5 per cent after earlier rising as much as 5.93 per cent after the RBI eased cash and bond holding rules for banks late on Tuesday.
The rupee on the other hand, hit a fresh all-time low, trading around 64.40 per dollar as heavy dollar buying from large state-run banks along with demand from custodian banks hurt the local currency on Wednesday.
The partially convertible rupee was trading at 64.30/40 per dollar, after hitting a record low of 64.40 and down around 1.7 percent on the day.
Traders said there was no signs of RBI's intervention in the spot market so far during the session.
Book value or net worth of state-owned banks would become more opaque after the Reserve Bank of India eased bond holding rules, Morgan Stanley said in a report on Tuesday.
State Bank of India is down 1.2 per cent after earlier rising as much as 5.5 per cent, while ICICI Bank Ltd is down almost 2.4 per cent, also retracing intra-day gains.
Falls also track lower global shares on concerns that minutes of the US Federal Reserve's July policy meeting may add to suspicions it will soon pare back on stimulus.
Market Reacted Well To RBI Measures
Earlier, snapping a three-day downmove, the Bombay Stock Exchange (BSE) benchmark Sensex Wednesday jumped by 321 points in early trade, led by rally in banks and capital goods stocks, on the back of overnight
steps taken by Reserve Bank of India (RBI) to ease liquidity.
The RBI said late on Tuesday it will buy Rs 8,000 crore of bonds on Friday and will pare down its cash management bill sales as its target of pushing up the overnight rate to the central bank's emergency funding rate of 10.25 per cent had been achieved.
The RBI relaxed rules on mandatory bond holdings for banks, known as the statutory liquidity ratio, which will help protect lenders from large mark-to-market losses. While banks had previously been asked to cut their hold-to-maturity bond holdings gradually to 23 per cent of deposits, the RBI on Tuesday allowed banks to retain them at 24.5 per cent of deposits.
The 30-share barometer surged by 321.66 points, or 1.76 per cent, to 18,567.70, aided by buying in beaten down bluechip stocks. The index had lost over 1,121 points in the previous three sessions. Similarly, the wide-based National Stock Exchange index Nifty recovered 80.85 points, or 1.50 per cent, to 5,482.30.
Brokers said sentiments turned better after the RBI yesterday (20 Aug) announced a fresh set of liquidity easing steps amid rupee falling past 64 mark.
The banking sector index led the recovered by gaining 5.53 per cent to 11,092.12 points as stocks of SBI were up by 5.07 per cent to Rs 1,632.20, ICICI Bank by 3.34 per cent to Rs 857.25, and HDFC Bank by 5.25 per cent to Rs 614.90.
Meanwhile, in other Asian markets, Hong Kong's Hang Seng index fell by 1.01 per cent, while Japan's Nikkei shed 0.79 per cent in the early trade. Ahead of release of crucial minutes of the Fed meeting held in July, the US Dow Jones Industrial Average ended 0.05 per cent lower in Tuesday's trade.