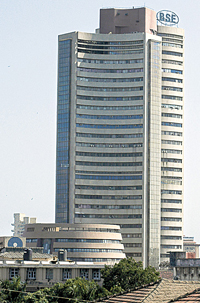 08 November, 2014
Print this article Font size -16+
The BSE Sensex rose more than 2 per cent to its highest close since July 2011 after the government's diesel price hike and the Federal Reserve's monetary stimulus sparked a broad-based rally in blue chips such as Reliance Industries and ICICI Bank.

The steep hike in prices for the heavily subsidised diesel was seen signaling the government's resolve to tackle fiscal reforms at a time when international credit rating agencies threaten to downgrade the sovereign's debt to "junk" status.

Friday's Big Bang reforms can also be expected to make the market zoom when it open s on 17 September. Global factors could also turn in India's favour if the Fed's revival of its asset purchase programme unleashes more liquidity into risk assets, although investors will also eye the negative impact from a potential surge in crude oil prices.

"It is important now that government continues to act. One diesel hike is not enough. FDI in retail and disinvestment program is really important," said Sandeep J Shah, CEO, Sampriti Capital.

"The rally could peter out of there is no continued action by government."

The BSE index 4 per cent for the week, its strongest performance since the trading week ended on June 8.

Analysts were especially hopeful the twin domestic and US developments would spur more foreign buying of Indian stocks.

Foreign institutional investors have already bought a net Rs 65,954 crore of Indian stocks so far this year, and have been a major reason behind the 19.5 per cent gain in the BSE index so far this year.

Lenders also surged on hopes that more government reforms could open up the prospect of interest rate cuts, although the Reserve Bank of India is expected to stay on hold at its policy review on Monday after August inflation rose more than expected.

India's wholesale price index last month rose 7.55 per cent, above expectations for a 6.95 per cent increase.

Airline shares rose on persistent on hopes the government would target the sector next.

Under current rules, foreign airlines are barred from buying stakes in domestic carriers, although foreign investors are allowed to hold a cumulative 49 per cent.

SpiceJet rose 4.4 per cent, bringing its gains over the past four sessions to 17.34 per cent, while Kingfisher Airlines rose 7.5 per cent.

Among other gainers, Indian retail stocks surged on Friday on market talk the government may also consider opening up the multi-brand segment to foreign direct investment, even if the issue was not expected to be in the agenda for the government cabinet's weekly meeting.

Pantaloon Retail gained 7.12 per cent, while Trent rose 3 per cent.

However, among decliners, Indian oil marketing companies and refiners erased earlier sharp gains and turned negative as the spike in crude prices post-QE3 is seen offsetting the positive impact of the government's diesel price hike.

Among drug makers, Lupin fell 4 per cent, while Glenmark Pharma fell 4.5 per cent.