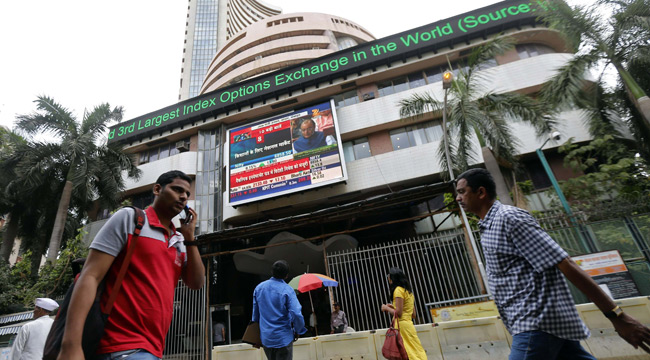 12 May, 2015
Print this article Font size -16+
The benchmark BSE Sensex gained over 218 points in early trade on Monday on the back of buying by funds as well as retail investors, tracking positive global cues.
The 30-share barometer advanced 218.20 points, or 0.80 per cent, to 27,323.59, with all sectoral indices led by realty, metal and auto trading up to 1.51 per cent higher.
The gauge had rallied 506.28 points on Friday on government's move to soothe overseas investors' taxation concerns, and rupee's recovery.
On similar lines, the NSE index Nifty was quoting above the crucial 8,200-mark by rising 64 points, or 0.78 per cent, to 8,255.50.
Brokers said the pick-up in buying by funds and retailers amid a firming trend at other Asian markets in a positive reaction to China's decision to cut interest rates at the weekend for the third time in six months and a solid US jobs report boosted market sentiment.
Among other Asian markets, Hong Kong's Hang Seng index ruled higher by 0.52 per cent while Japan's Nikkei gained 1.25 per cent in early trade.
The US Dow Jones Industrial Average ended 1.49 per cent higher in Friday's trade.
(PTI)
Tags assigned to this article:
news 3 stockmarket sensex nifty nse bse