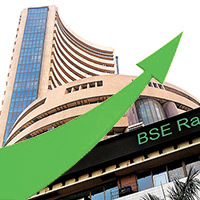 08 November, 2014
Print this article Font size -16+
The benchmark Sensex on Tuesday (14 October) washed out initial gains and ended nearly 35 points down at 26,349.33 on selling in realty, IT, consumer durable shares amid investors adopting caution ahead of key state elections.

Fall in retail inflation and wholesale price rise, which hit a five-year low in September, as well as better than expected earnings from RIL initially boosted markets but losses in HDFC, Tata Motors, ITC, HDFC Bank, ONGC and TCS dragged the Sensex into the red.

Shares of realty giant DLF today fell sharply by over 28 per cent, wiping out Rs 7,439 crore from its market valuation, after Sebi imposed a three-year ban on the company and six top executives from securities markets.

"Maharashtra and Haryana will go to the polls for their respective state legislative assemblies on Wednesday (15 October)...the best case in these state elections is for the BJP to get an outright majority, which will improve centre-state co-ordination and consolidate the BJP's position in the Rajya Sabha," said a Nomura report.

Retail inflation dropped to 6.46 per cent in September on falling prices of fruits and vegetables, the lowest since India started computing Consumer Price Index (CPI) in January 2012. The September wholesale price inflation also fell to five year low of 2.38 per cent.

Both the stock exchanges, BSE and NSE will remain closed tomorrow on the account of voting for assembly polls in Maharashtra.

European markets were trading lower in afternoon trade as data showing decline in French consumer prices in September added to worries over low inflation in the Eurozone. Key benchmark indices in France, Germany and the UK fell by 0.67 per cent to 0.91 per cent.

Locally, 16 scrips out of the 30-share Sensex pack ended higher while 14 others finished lower.

"We believe, this is a temporary phenomenon for the markets and markets would soon resume its normal course over the next 2-3 trading sessions," said Rakesh Goyal, Senior Vice President, Bonanza Portfolio.