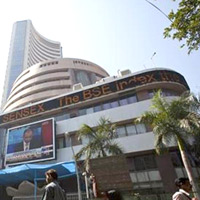 08 November, 2014
Print this article Font size -16+
The BSE benchmark Sensex on Monday, 15 April, 2013 recovered 115 points on funds buying in bluechip stocks such as ONGC, SBI, Bharti Airtel and RIL amid lower crude oil prices in overseas markets and hopes of rate cut by RBI in May after lower-than-expected inflation number in March.

The index had dropped 300 points in the previous session.

Brokers said oil and gas sector stocks were higher as crude oil declined in overseas markets, while easing inflation data in March triggered hopes of repo rate cut by the Reserve Bank of India in its annual policy meet on May 3.

Softening vegetable prices has pulled down inflation to over three-year low of 5.96 per cent in March. This is the lowest level of Wholesale Price Index (WPI) inflation since December 2009 when it was 4.95 per cent.

A weakening trend in overseas makets as foreign funds shifted their focus to India, failed to influence the sentiment, traders added.

After a steep fall in gold and silver prices, stocks of gold loan finance companies such as Muthooth Finance and Tiatan industries were dwon significantly.

In 30-BSE index componenets, 15 stocks gained while other 15 closed with losses.