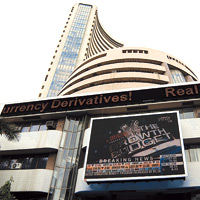 08 November, 2014
Print this article Font size -16+
Falling fo the sixth straight day on 16 November' 2012, the BSE benchmark Sensex tumbled 162 points to end at nearly two-month low on late selling in realty, banks and auto shares as the RBI dashed hopes of an early rate cut saying inflation is still "quite high".
Weak trends in global markets on Eurozone debt worries and the rupee trading above 55-levels against the dollar also hit the sentiment. After a better start at 18,563.32, the Sensex erased early gains after selling in rate-sensitives gathered pace in the last half hour of trading.
The 30-share Sensex closed 162 points, or 0.88 per cent, lower at 18,309.37 -- a level last seen on September 20.
"At 7.45 per cent inflation is certainly quite high," RBI Governor D Subbarao told reporters on the sidelines of a function in Pune, adding the central bank is always on "high alert" on the inflation front.
After headline inflation fell to an 8-month low of 7.45 per cent in October, investors had hoped for a rate cut in December when RBI reviews the monetary policy, said traders.
ICICI Bank lead the 24 losers in 30-share Sensex, followed by Tata Motors, SBI, Bhel, Maruti and HDFC.
Analysts said the rupee falling against dollar and worries over slowing global growth further forced investors to sell holdings.
The mood also turned cautious ahead of the Winter session of Parliament which starts on November 22. The important economic agenda for the session includes amendment to the Insurance Bill to raise FDI cap from 26 to 49 per cent, Banking Regulation Amendment Bill and Direct Taxes Code.
The National Stock Exchange index Nifty traded below crucial 5,600 mark level by falling 56.95 points, or 1.01 per cent to 5,574.05.
"Markets ended the week on a negative note. For the week, the benchmarks were down by about 2 per cent on concerns over the so-called US 'fiscal cliff', worries over India's fiscal deficit and weak macro data...," said Dipen Shah, Head of PCG Research, Kotak Securities.