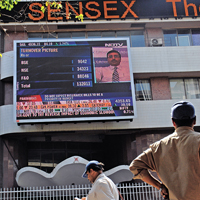 08 November, 2014
Print this article Font size -16+
Erasing early gains, the BSE benchmark Sensex plunged below the 19,000-level by falling over 350 points in late morning trade even as RBI cut its key policy rate by 0.25 per cent.

All the sectoral indices, led by oil and gas and banking, were trading in negative, with losses of up to 2.47 per cent.

Brokers said a cut in short-term lending rate by 0.25 per cent to 7.75 per cent after a gap of nine months, and reducing Cash Reserve Ratio (CRR) by 0.25 per cent to 4 per cent by the Reserve Bank brought cheer to the market as the move would reduce the cost of home, auto and corporate loans and improve liquidity in the market.

The fall was mostly led by interest rate sensitive stocks such as banking after the Reserve Bank did not cut the cash reserve ratio (CRR), they added.

They said a cut in CRR would have benefited banks by easing liquidity.

Sounds From Rohingya Colony: From Hope To Fear In A Matter Of Hours