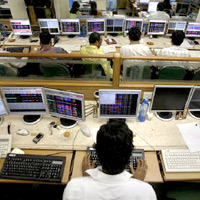 08 November, 2014
Print this article Font size -16+
The BSE Sensex was down 0.44 per cent, after posting a second consecutive record closing high on Thursday (23 January), while the Nifty falls 0.54 per cent.

Rate-sensitive stocks fell after Reserve Bank of India Governor Raghuram Rajan was quoted as saying that inflation was a "destructive disease" that was forcing the bank to keep interest rates high, according to a Press Trust of India report carried by The Economic Times newspaper's website.