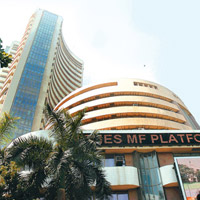 08 November, 2014
Print this article Font size -16+
The BSE Sensex fell more than 1 per cent to its lowest close in three months on 26 February' 2013 as blue chips such as ICICI Bank were hit by caution ahead of the 2013/14 budget, although mobile operators rallied on expectations of a cut in airwave auction prices.
The fall also tracked a sell-off in global equities after Italy's inconclusive election results revived euro zone concerns, sending the MSCI Asia-Pacific index outside Japan down 1.2 per cent.
Shares in India's wagon manufacturers such as Titagarh Wagons Ltd dropped after the government unveiled the railway budget for the year starting in April that was seen lacking big announcements or projects.
Investors are gearing up for the union budget on Thursday, the same day as the expiry of derivatives, which could magnify any volatility.
"Finance Minister is certainly going to show fiscal deficit at lower side. A roadmap to do away with subsidy business would be more important from markets perspective," said Deven Choksey, managing director of KR Choksey Securities.
The benchmark BSE Sensex fell 1.64 per cent, or 316.55 points, to end at 19,015.14, marking its lowest close since November 27.
The broader Nifty fell 1.6 per cent, or 93.40 points, to end at 5,761.25, posting a three-month closing low as well as the biggest daily fall since July 23, 2012.
Blue chip stocks were among the leading decliners as traders lightened positions ahead of the federal budget. India is also due to post its annual economic report on Wednesday, while final economic growth for the October-December quarter are due on Thursday.
ICICI Bank Ltd fell 2.7 per cent, while Tata Motors  dropped 3.3 per cent.
Shares in India's wagon manufacturers declined after the 2013/14 railway budget did not result in any big investments as the government looks to keep spending in check.
Texmaco Rail and Engineering Ltd dropped 10.8 per cent, while Titagarh Wagons Ltd slumped 8.3 per cent, and Kalindee Rail Nirman Engineers Ltd lost 11.2 per cent.
Among other decliners, Ranbaxy Laboratories Ltd shares fell 4 per cent after reporting a quarterly net loss of 4.92 billion rupees due to provisioning towards costs that might arise due to a product recall in the United States.
Shares in Jet Airways Ltd fell 11.2 per cent, down for a fifth day, on continued concerns about whether the carrier will clinch a deal to sell its stake to Abu Dhabi-based carrier Etihad Airways.
However, shares in Indian mobile network operators rallied with Bharti Airtel Ltd gaining 1.6 per cent and Idea Cellular rising 4.1 per cent on expectations the government would be forced to cut the reserve price for airwaves after just one potential bidder emerged for a $7.9 billion spectrum sale next month.
Infosys Ltd gained 1.4 per cent, while Tata Consultancy Services Ltd rose 1.5 per cent on hopes of incentives for exporters in the 2013/14 budget to be unveiled on February 28.