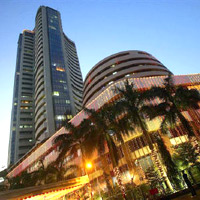 08 November, 2014
Print this article Font size -16+
After galloping over 450 points on exit polls predicting gains for the BJP in key state elections, the benchmark Sensex closed below 21,000-mark as profit booking curbed the rise to about 250 points.Banking, capital goods and PSU shares were the leaders as 9 of the 13 sectoral indices on the BSE rose. However, healthcare, FMCG and IT shares fell.
The Sensex, which lost 189.30 points in the previous two sessions, shot up to day's high of 21,165.60 before ending at 20,957.81 -- a gain of 249.10 points, or 1.20 per cent. Thursday was the first day in a month the index breached the 21,000-level after hitting 21,142.85 intra-day on 7 November.
Shares of ICICI Bank shot up 6.66 per cent, followed by HDFC Bank (4.52 per cent), L&T (4.49 per cent). These three stocks accounted for over 210-point surge in the 30-share Sensex where 20 constituents ended in the green. ITC, Sun Pharma, Dr. Reddys and TCS were among the 10 that ended lower. The NSE Nifty barometer, which breached the 6,300 level intra-day, ended 80.15 points, or 1.3 per cent, up at 6241.10.
Brokers said a flurry of buying triggered by exit poll results predicting a good show by the Bharatiya Janata Party (BJP) in the states of Rajasthan, Madhya Pradesh, Chhattisgarh and Delhi elections, buoyed the trading sentiment. The BJP is perceived by many investors as being more business-friendly, and investors say expectations of its wins could spark additional gains in Indian indices that are already near record highs. Still, opinion and exit polls have a patchy track record in India. Most surveys forecast the wrong outcome in the 2004 general election.
"Exit poll led rise is good but would be sustainable only if US jobs data leads to a delay in tapering of the Federal Reserve's stimulus program. At the end of the day, it will be more about where FII liquidity moves," said Aneesh Srivastava, chief investment officer at IDBI Federal Life Insurance.
"While the seat forecasts varied between the exit polls, the overall message seemed to be that BJP would be the leading party in all the 4 states. If the results are in line with the exit polls, we think it would be positive for the market. The market is looking for a strong, stable Government post 2014 elections," Bank of America Merrill Lynch said in a report.
Mirroring the movement in stocks, the Indian rupee surged to over 5-week high of 61.53 versus dollar in early trade but lost some momentum to trade at 61.77, still 30 paise up compared to Wednesday, when share market closed for the day.
Sectorally, the BSE Banking sector index gained the most by rising 4.44 per cent, followed by Capital Goods index (3.59 per cent), PSU index (1.51 per cent) and Realty index (1.48 per cent).
Adani Group stocks also rose as the conglomerate is based in Gujarat state, where the BJP's prime ministerial candidate Narendra Modi is chief minister. Because of the location and perceptions of close ties between Adani and the BJP, shares of the Adani Group can at times move depending on the perceptions of electoral success for the party.
(Agencies)
Tags assigned to this article:
stockmarket top 1 bjp sensex narendra modi federal reserve congress adani group us fed state elections market watch exit polls stimulus program