Sensex Ends At 3-Wk Closing High On Hopes Of Reforms 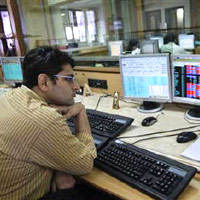 08 November, 2014
Print this article Font size -16+
The BSE Sensex rose for a fifth consecutive session to a three-week closing high on rising hopes for fiscal reforms after Oil Minister S. Jaipal Reddy said India will have to hike the price of heavily subsidised fuels such as diesel in the near term.
State-owned oil marketing companies such as Hindustan Petroleum Corp were among the day's leading gainers, while financial firms such as ICICI Bank also advanced on hopes fiscal reforms would spur the central bank to cut interest rates.
Despite being disappointed in the past, investors remain hopeful the government will soon announce fiscal reforms given India is under threat of being downgraded into a sub-investment grade ratings by Standard & Poor's and Fitch Ratings.
Investors also retain their confidence on recently-appointed Finance Minister P. Chidambaram, who is so far seen as having sent the right signals on reforms.
"Chidambaram is the person who will do things, but we don't have the political space to do something very bold," said V.K Vijayakumar, an investment strategist at Geojit BNP Paribas Financial Services.
"If 4-5 rupees hike in diesel price happens, that will be big short in the arm for the markets. If that happens 5,600 on the Nifty will be taken soon," Vijayakumar added, though he does not expect other reforms such as further opening up the retail or aviation sectors to foreign investment.
The BSE Sensex rose 0.49 per cent, or 86.17 points, to 17,852.95, marking its highest close since August 21 .
The Nifty ended up 0.52 per cent, or 26.55 points to 5,390, inching closer to the psychologically key level of 5,400.
Shares in state-owned oil marketing companies held on to their gains after Oil Minister Reddy said the country would have to hike the price of heavily subsidised fuels.
Shares in the sector had earlier gained on market speculation a fuel price hike would be discussed at a planned cabinet meeting, though Reddy denied the issue was on the agenda.
Hindustan Petroleum Corp gained 2.6 per cent, Bharat Petroleum Corp rose 2 per cent, and Indian Oil Corp Ltd ended up 0.5 per cent.
Financial firms rose on hopes fiscal consolidation steps would spur the Reserve Bank of India to cut interest rates, since central bank officials have repeatedly called on the government to shore up its finances.
Home loan provider HDFC gained 2.5 per cent, while ICICI Bank rose 1.2 per cent.
Among the day's other gainers, Panacea Biotec Ltd surged 20 per cent, hitting its maximum daily limit for a second day, after saying it would jointly develop with US -based Osmotica Pharmaceutical Corp at least 18 branded and generic drugs.
However, shares in Sterlite Industries dropped 4.6 per cent while Sesa Goa fell 6.2 per cent after Goa temporarily suspended all mining activities starting on Tuesday.
JSW Steel ended down 0.7 per cent on concerns the suspension in Goa would impact domestic supply of iron ore and thus send prices of a key ingredient higher.
Shares in Hero MotoCorp fell 1.21 per cent on worries the two-wheeler maker will have to cut production after an industry report on Monday said sales fell 11.9 per cent in August.