Sensex Down 75 Pts In Opening Trade 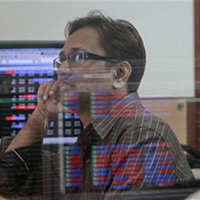 08 November, 2014
Print this article Font size -16+
The BSE benchmark Sensex fell by almost 75 points in opening trade due to increased selling by participants ahead of September WPI inflation data and second quarter earnings by Reliance Industries. The 30-share index, which had lost 129.57 points in the previous session, fell by 74.52 points, or 0.39 per cent, to 18,600.66, led by stocks of auto and banking sectors. Similarly, the wide-based National Stock Exchange Nifty Index shed 25 points, or 0.44 per cent, to 5,451.05.
Brokers said participants adopted a cautious approach and trimmed their positions ahead of wholesale inflation data for September, to be released later in the day and Q2 earnings by Reliance Industries, which has significant influence over 30-share Sensex.
A weak trend in the Asian region also had its impact on the trading sentiments, they added. Meanwhile, in Asian region, Japan's Nikkei was down by 0.03 per cent, while Hong Kong's Hang Seng index shed 0.23 per cent in opening trade.
(PTI)
Tags assigned to this article:
india inflation news 3 wpi stockmarket markets sensex nifty nse bse september inflation data