Sensex Down 66 Points In Early Trade 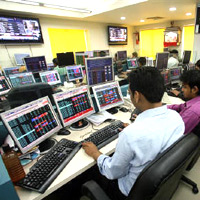 Shares of Infosys fell by 7.10 per cent to Rs 2,351.60 in early trade, after the company reported consolidated profit for July-September period at Rs 2,369 crore, a growth of 24.29 per cent. In the Asian region, Hong Kong's Hang Seng index was up by 1.07 per cent, while Japan's Nikkei Index gained 0.71 per cent in the morning trade.

Micron To Invest $40 Bn In Memory Chips Manufacturing In US