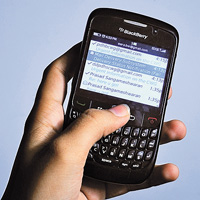 08 November, 2014
Print this article Font size -16+
In a bid to combat the menace of pesky calls and SMSes, sectoral regulator Trai has decided that telecom facilities given to subscriber would be immediately disconnected if it is found being used for sending unsolicited communication.

Name and address of such subscribers shall be entered into a blacklist and no resources would be allotted to these subscribers for a period of two years in such cases, Trai Member RK Arnold told reporters.

Amending the Telecom Commercial Communications Customer Preference Regulations 2013, Trai today said in case of a valid complaint, the telecom operator shall disconnect all the telecom resources allotted to such subscriber, after due investigation. This provision comes into force with immediate effect.

"The moment a complaint is received by a service provider from a customer... it will immediately investigate into that complaint and if it finds the communication unsolicited, the regulations provides for immediate disconnection of that resource," Arnold said.

Trai said it has introduced the measures to further strengthen the framework for controlling unregistered telemarketers.

"...there are many private persons who are sending the commercial messages to the subscribers...now with this particular amendment...resources of such subscribers will be disconnected," Arnold said.

Meanwhile, TRAI has amended the Telecom Commercial Customer Preference Regulations, 2010, which prescribes a transactional charge of 5 paisa per transactional SMS, which will come into effect from June 1.

Presently, only the promotional messages are charged.

"The 5 paisa charge is already there for promotional messages. Now, it will be applicable for transactional messages also, which also falls under the category of commercial communications," Arnold said.

Apart from that, the authority said it has introduced the Short Message Services (SMS) Termination Charges Regulations, 2013, which prescribes a termination charge of 2 paisa per SMS. The regulations would come into effect from June 1.

SMS termination charges are payable by originating telecom operator to the terminating operator for each SMS terminated by it on its network.

Arnold attributed the introduction of these amendments to ensure level-playing field among operators and to protect consumer interest.

He added that though the policy of forbearance worked satisfactorily in the past but in changed circumstances there were issues in this regard.

With increase in SMSes these days, there was a large imbalance in SMS traffic between the networks of inter-connecting service providers, he said.

This is in order to "create certainty in the market", counter "exigencies created by certain dominant players and to protect the interests of the consumers", it added.