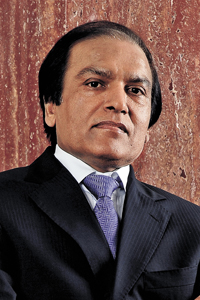 08 November, 2014
Print this article Font size -16+
The lowest point in the career of Dinesh Shahra, managing director of Ruchi Soya Industries, was in 2008 when the global meltdown saw the company's margin (Ebitda) plummet by half. During that time, the  commodity prices crashed and Shahra's customers did not adhere to contractual agreements. Shahra was forced to sell his products at lower prices, even though the raw materials purchased were at higher prices. "2008 was even worse than the unfortunate fire in our Indore plant in 2006," says Shahra, who believes that difficult times throw opportunities, and it is on the individual to catch them. "We cut prices to help those with whom we had long-term relations. In good times, they are supporting us by absorbing a rise in price. We have hiked our prices by 50 per cent." Shahra's perseverance has paid off in 2009-10, so much so that he has bagged the position of the most ‘value'able CEO (one-year performance) in the large companies category.

The youngest of four brothers, Shahra is a chemical engineer from Kanpur. Over the past 10 years, the Rs 14,000-crore company's consolidated revenue and net income has seen a compounded annual growth of 21 and 22 per cent, respectively.

Over the past year, the company, which has 50 per cent market share in palm oil, has gone overseas, acquiring Palm Tech and Mac Oil Palm, and focused on retail branding and institutional clients. All this has helped Ruchi Soya attract investors, leading to its share price doubling over the past year. Its market share in the overall edible oil segment rose from 10.8 per cent in FY09 to 15.2 per cent in FY10, which Shahra wants to increase to 20-25 per cent over the next 4-5 years. He is also expanding into upstream businesses to enhance margins as well as secure the supply chain.

"If I have to maintain a 15-20 per cent topline growth for the next decade over an expanded base, I will have to scout for acquisition," he says. "By next year, I will also increase our refining capacity to 3.2 million tonnes (from 2.1 million tonnes)." The company plans to nearly double domestic cultivation to 300,000 hectares from 180,000 hectares, and cultivate another 150,000 hectares of land overseas, for which it has already secured 20,000-25,000 hectares in Ethiopia. It is currently in talks to acquire land for palm oil plantation in Cambodia, Malaysia and Indonesia.

However, the company's foray into the food segment has not borne fruit. It had launched soya milk, but that did not take off. Now it plans to launch margarine Nutrela next year. "The aim is to double Ebitda margin from the current 5 per cent," says Shahra. "Securing raw material and going the retail way is the only way we can improve margins." Though his strategy will help the company hedge its raw material demand by 40 per cent over a decade, in the near term, his work is far from over as the company continues to be influenced by the vagaries of weather and the market.