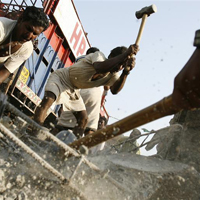 08 November, 2014
Print this article Font size -16+
Saudi Arabia has given foreign workers another four months to obtain legal status in the country a day before a previous three-month amnesty expired, bringing respite to hundreds of thousands of expatriates who fear deportation.

Foreigners who do a different job to the one listed on their residence permit, will now have until the end of the Islamic year on Nov. 3 to resolve their status, Saudi official media reported on Tuesday, 2 July '2013, citing an Interior Ministry statement.

Expatriates account for around a third of the population in the world's top oil exporter and for decades the authorities have turned a blind eye to visa irregularities to give Saudi companies a ready stream of cheap imported labour.

That has led to the emergence of a labour black market, which the government says makes it harder for Saudis to get jobs in a country with an official 12 percent unemployment rate, and which economists say fosters inefficiencies.

Remittances from workers in Saudi Arabia are an important source of revenue in Yemen, Pakistan, India, Sri Lanka, Indonesia, the Philippines and Yemen.

Earlier this year the kingdom began to crack down on the many foreign workers who have violated their visa terms with surprise inspections on streets and in company offices.

Tens of thousands of people were deported or decided to leave the country under this pressure, raising concern about possible damage to the economy if deportations continued.

The government then announced an amnesty during which workers would be forgiven any fees or fines for visa violations such as overstaying or switching jobs, but bureaucratic delays mean many have still not regularised their status.

"They might have deported me. This is the situation for so many of us. I was very worried. We didn't know what would happen on Wednesday (when the deadline expired)," said a Pakistani working as a receptionist for a company in Riyadh.

Crackdown
Behind the crackdown is a government effort to enforce sweeping labour reforms it introduced last year that impose quotas for Saudi and foreign employees and reserve some jobs exclusively for locals.

Companies try to get around localisation quotas by hiring workers who are officially sponsored by another company. However, the government is trying to close that loophole by imposing the same quotas on manpower companies.

Workers are also in violation if they work in a different professional field to the one they are listed under, a widespread problem in a country where many expatriates are officially listed as labourers but work as anything from drivers to administrators.

"Maybe 30-35 per cent of our staff are correctly registered. I have 10 people under the sponsorship of our company, of whom six are Saudis. So technically we've met our quota. But there are 12 others who are employed from outside," said an office manager in Riyadh.

"If they hadn't extended I would have had to ask many of our staff to work from home from tomorrow or to stop working temporarily until we could resolve the problem," he added.

Like the receptionist, he did not want to name the company for fear of government inspections.

The sudden announcement of a three-month amnesty in April led to massive queues outside government offices and the consulates of labour exporting countries as offices were flooded with hundreds of thousands of requests.

Many reported queuing for days on end in temperatures of higher than 40 degrees Celsius. Waiting workers rioted outside the Indonesian embassy last month, leaving a woman dead and clashing with police.