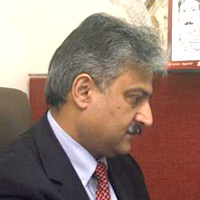 Bharti Airtel is replacing the chief executive of its key domestic operations as the group seeks to reverse a trend of declining profits. The world's fourth-biggest mobile phone carrier by customers has struggled to grow amid tough competition in its home market, which accounts for about 70 percent of its revenue. The Indian mobile market leader, which also operates in Africa, had posted 11 straight quarters of declining profit in September.
India is the biggest market for Bharti, which operates in Sri Lanka, Bangladesh and 17 African countries.

"Sanjay will continue in his current role until February 28, 2013, and will be available to assist on key matters until March 31, 2013 ensuring a smooth transition process," the statement said.

Kapoor will, however, continue to be on the Board of Indus Towers and Bharti Global, the statement said.

"Sanjay has had an enviable performance track record, strategic disposition, business acumen and is an inspirational leader. I wish Sanjay all the very best in his future endeavours," Bharti Airtel Chairman and Managing Director Sunil Bharti Mittal said in the statement.

Bharti Airtel shares jumped in afternoon trade ahead of the news, with traders attributing the surge to a likely sector-wide increase in voice call tariffs. The stock closed 5 per cent higher, while rival Idea Cellular climbed 8.4 per cent.
In his new role as the CEO - India, Vittal, who will report to Mittal, will be responsible for defining and delivering the business strategy and providing overall leadership for Airtel’s India operations.

"Vittal spent his last year understanding the new wave of mobile telephony, in particular the data space and data experience. This will be extremely relevant and valuable for the next phase of Airtel's growth. I wish him a successful and exciting journey ahead," Mittal said.

"Until now it has only been about voice. Now it will be about data, video calling, so many other applications pertaining to data," said a Mumbai-based telecoms analyst who declined to be named.

Vittal, with his consumer goods background, is well-placed to drive the change, the analyst added.

However, various business leaders and functions from Airtel India would continue to support South Asia operations in this revised arrangement.