Same-day Visa For Businesses, No Cap On Students: Cameron 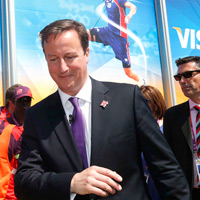 08 November, 2014
Print this article Font size -16+
Out to woo Indian businesses and students, British Prime Minister David Cameron on Monday, 18 February, 2013, announced his country would introduce same-day visa services for investors and said there would be no limit on the number of students from here studying there.

"We have the biggest visa operations anywhere else in the world right here in India. I announce that we are going to introduce for businesses a same-day visa service to those who want to come to our country and invest...," Cameron told India Inc at Hotel Taj, the country's hospitality icon.

On the issue of Indian students in Britain, he said there is "no limit" on the number of Indian students who can come and study in universities there and also no cap on the length of time they can stay and work in graduate-level jobs after they qualified.

Cameron, who is accompanied by the largest-ever trade delegation, also said India should continue to reduce trade barriers to create better opportunities for British companies.

"Britain is looking to take down the (trade) barriers ...we want the Indian government to continue to open up trade barriers and make it easier to do business here...We have to make sure that just as we welcome Indian investments into Britain, it is easier for British companies like banking, retail etc to invest in this vibrant and fast growing economy," he said.

The British premier also said there are great opportunities for Indian companies to invest in Britain.

"When I see Indian investment into Britian, I only see hope...investment like Jaguar and Land Rover, which is a massive international success story...We welcome that sort of investments," Cameron said, adding his country seeks to be the most investor-friendly market.

On his second state visit to the country in under three years, Cameron also called for the need to forge greater partnership with India as the British economy is starting to recover from recession.

"The time to forge partnership is now as the British economy has started to recover from difficulties of last two years and the Indian economy powers ahead (to become) one of the great powers," he said.