Mumbai (Maharashtra) [India], January 7 (ANI): Bollywood actors Saif Ali Khan and Arjun Kapoor along with producer Ramesh Taurani flew off to Jaisalmer on Thursday to shoot the final schedule for the upcoming horror-comedy 'Bhoot-Police'.
Film critic and trade analyst Taran Adarsh confirmed on Twitter that the cast and crew of 'Bhoot-Police' are all set to roll out the final schedule of the film in Jaisalmer this month. 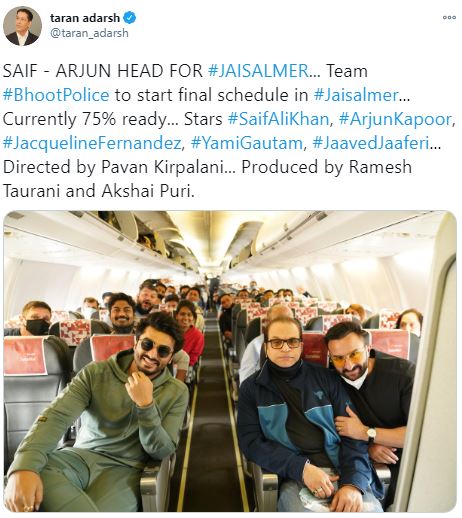 The shoot for the upcoming horror-comedy is almost seventy-five per cent completed. It was shot post lockdown in the picturesque locations of Dharamshala and Dalhousie amid the COVID-19 pandemic.
Starring Saif Ali Khan, Arjun Kapoor, Jacqueline Fernandez, Yami Gautam and Jaaved Jaaferi, 'Bhoot Police' is helmed by Pavan Kirpalani and produced by Ramesh Taurani and Akshai Puri. (ANI)