Sage Dreams Of Gold To Save Economy, Government Starts Digging 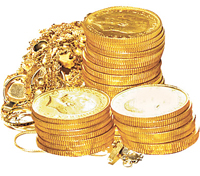 08 November, 2014
Print this article Font size -16+
The government is digging for treasure after a civic-minded Hindu village sage dreamt that 1,000 tonnes of gold was buried under a ruined palace, and wrote to tell the central bank about it.
The state Archaeological Survey of India has sent a team of archaeologists to the village of Daundia Khera in Uttar Pradesh. They are due to start digging on 11 October' 2013, Praveen Kumar Mishra, the head archaeologist in the state, told Reuters.
Yogi Swami Shobhan Sarkar says the gold he dreamt of belonged to a nineteenth-century ruler, Rao Ram Bux Singh. He says he wants it in government hands to help India recover from an economic crisis.
"I cried the day I realised that India is going to collapse economically," the seer told the Mail Today newspaper. The dead ruler's spirit has been roaming the palace and asking for the gold to be dug up, he added.
"It is a hidden treasure for the country."
Not all Hindu leaders are so keen to put bullion into the Reserve Bank of India's vaults. Temples sitting on about half as much gold as in Fort Knox are resisting efforts by the central bank to audit their holdings.
Indians buy as much as 2.3 tonnes of gold, on average, every day - the weight of a small elephant - and what they don't give to the gods is mostly hoarded.
That is costing the economy dear, since India has few gold mines. Gold imports totalled $54 billion in the year ending on March 31, 2013, a major factor in swelling the current account deficit and undermining the rupee.
Swami Sarkar's dream haul of 1,000 tonnes would be enough to replace all of India's imports for a year and would be worth at least $40 billion.
The archaeologists plan to dig two 100-square-metre blocks beside the palace. Mishra, however, warned that there was as yet no proof that any treasure lay beneath the soil of Daundia Khera village.
"We are still searching for the exact location and whether there is any treasure. It is all in the future," he said. "We often just find pottery and metal antiquities, like agricultural tools or kitchen tools."