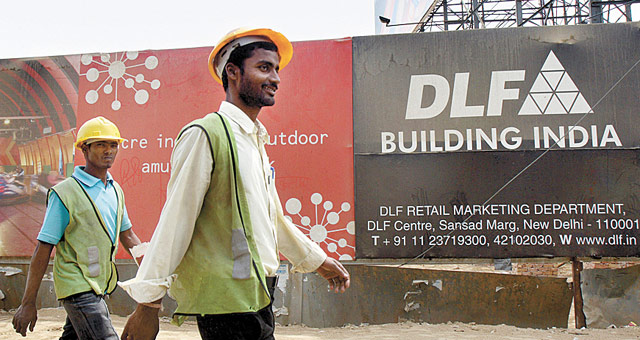 08 November, 2014
Print this article Font size -16+
Real estate major DLF was directed on Wednesday (27 August) by the Supreme Court to deposit Rs 630 crore fine slapped on it by the Competition Commission of India (CCI) for allegedly resorting to unfair business practices.
The apex court said the total ammount will be deposited within three months with its Registry pending the outcome of the appeal filed by DLF against May 19 order of Competition Appellate Tribunal's upholding the penalty of Rs 630 crore imposed by the CCI.
"We direct the appellant (DLF) to deposit the amount of Rs 630 crore in this court," a bench comprising justices Ranjana Prakash Desai and N.V. Ramana said in its interim order.
The bench said so far as the interest on the amount was concerned it has to be determined as per the November 9, 2011 order of the CCI that was fixed at 9 per cent.
It also directed DLF to file a fresh undertaking that in the event of dismissal of the appeal it will pay such amount as directed by the court.
DLF pleaded that it should be granted at least six months time to deposit the amount. However, the bench said it was inclined to grant three months time only.
Further, the bench directed that out of Rs 630 crore, the real estate major has to deposit Rs 50 crore in three weeks and the Registry will be at liberty to invest it in any of the nationalised banks.
The apex court adjourned the hearing by admitting DLF's appeal in which Haryana government, Haryana Urban Development Authority (HUDA) are parties along with the residents' association on whose plea the competition watchdog had imposed the penalty on the company.
The CCI in 2011 had found DLF violating fair trade norms and imposed a fine of Rs 630 crore on it following a complaint by Belaire Owners' Association in Gurgaon.
It was in May 2010 that the buyer's association had complained against DLF.
(PTI)
Tags assigned to this article:
supreme court news 4 infrastructure cci real estate dlf haryana huda