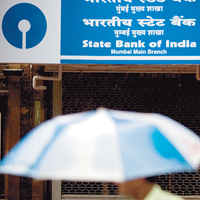 08 November, 2014
Print this article Font size -16+
Shares in State Bank of India gained as much as 3 per cent, adding to Friday's (23 May) 9.6 per cent jump, after earlier hitting their highest level since April 2011, as brokers raised target price and estimates on the stock, citing Jan-March earnings.

The bank on Friday reported a drop in bad loans and market-beating quarterly net profit.