Washington D.C. [USA], July 26 (ANI): American actor Naya Rivera's ex and the father of her son, Ryan Dorsey, has broken his silence on her untimely death.
According to Fox News, the 37-year-old actor took to his Instagram to honour the late 'Glee' actor, weeks after she died of accidental drowning in Lake Piru near Los Angeles, California. 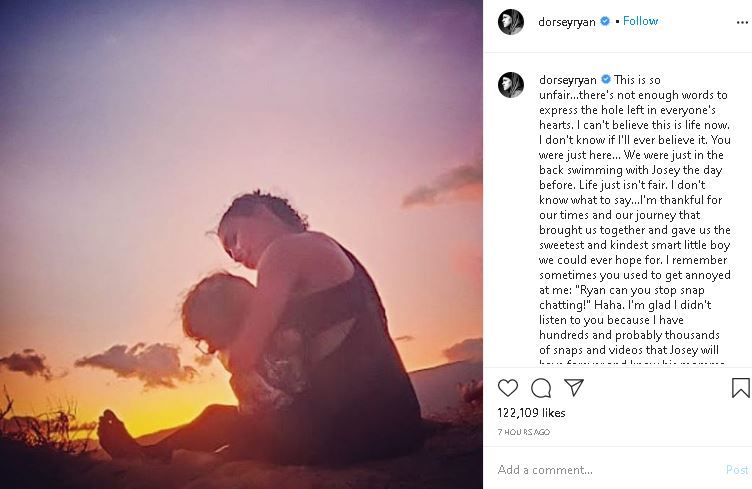 "This is so unfair...there's not enough words to express the hole left in everyone's hearts. I can't believe this is life now. I don't know if I'll ever believe it. You were just here... We were just in the back swimming with Josey the day before. Life just isn't fair. I don't know what to say...I'm thankful for our times and our journey that brought us together and gave us the sweetest and kindest smart little boy we could ever hope for," Dorsey began his caption underneath a touching photo of Rivera holding their son, 4-year-old Josey.
Dorsey shared a humorous anecdote about Rivera. He recalled often taking Snapchat videos and pictures of the late actor, to which she'd respond, "Ryan can you stop snap chatting!"
"I'm glad I didn't listen to you because I have hundreds and probably thousands of snaps and videos that Josey will have forever and know his momma loved him more than life, and how much fun we had together as he was growing up," Dorsey continued.
"Life is all about good times and bad times but with Josey, it makes the bad a little less so because a part of you will always be with us. He'll never forget where he came from. We miss you. We will always love you. Love you Meep," he concluded.
On July 14, the Ventura County Medical Examiner's Office confirmed that Rivera's cause of death was drowning, following the completion of an autopsy report. The manner of death is listed as an accident. She was 33.
Rivera was the subject of a massive search effort led by the Ventura County Sheriff's Office that lasted five days after she rented a pontoon boat with her 4-year-old son, Josey, and went missing. Police ultimately confirmed a body had been found at the northeast corner of Lake Piru. Hours later at a press conference, authorities said they were "confident" it was the former 'Glee' star.
Rivera and her son went swimming during their excursion, he was wearing a life jacket but she wasn't - and he got back into the boat but she didn't, the sheriff's department said.
The child was found safe on the boat three hours later by another boater, according to KCAL-TV in Los Angeles.
According to Ventura County Sheriff Bill Ayub, Josey told investigators that his mother helped him get back on the boat. He then looked back and saw her disappear into the water.
Dorsey and Rivera married in 2014 and got divorced in June 2018. Josey is their only child. She wrote in her memoir that her son was "my greatest success, and I will never do any better than him." (ANI)